This article is about Sheik's appearance in Super Smash Bros. Melee. For the character in other contexts, see Sheik; and for information about Sheik's alter-ego, see Princess Zelda.

Jun Mizusawa
Announced at E3 2001, Sheik (シーク, Sheik) is a starter character in Super Smash Bros. Melee. She transforms from Zelda by using her down special move (Transform), and can transform back. By holding the "A" button at the stage loading screen, Zelda will automatically transform into Sheik at the start of a match.

Sheik currently ranks fifth the tier list, which is located at the top of the A tier. This is primarily due to her chain throw, excellent combos, a great finisher in her forward aerial, a very good approach due to fast aerials and high jumps, and one of the best edge-guarding games in Melee. However, Sheik suffers from a relatively short and predictable recovery, as well as a rather short but quick wavedash along with most of her moves being weak for an attack of their type. 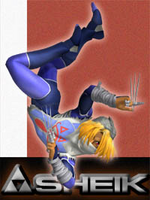 Sheik is a very fast character in both movement and attack speed, but her attacks lack power and are vulnerable to being crouch cancelled. However, as her opponent's damage percent climbs higher, the knockback of her attacks increase many fold.

Sheik's needles are arguably one of the best projectiles in the game. Not only are they quick to charge, but she can save her needles and continue charging them whenever she is given time to do so. Her needles can neutralize opponents' projectiles, especially Samus's Charge Shot and Mewtwo's Shadow Ball, and thanks to its hitstun, they can be added to her edgeguarding game. Needle canceling makes for a speedy and unpredictable air-to-ground game. For the advanced player, reverse needle canceling improves mobility and recovery, as they can turn themselves the other way to follow up into finishing blows.

Her side special move, Chain, has decent range, but has almost zero Hitstun, and is slow to execute and end, therefore making Chain virtually useless in advanced play. Despite this, Sheik's chain can be used to edgeguard Falco and Fox extremely effectively.

Sheik has one of the fastest wavedashes in the game. She has excellent dodging ability thanks to her unusually low crouch, which can help dodge projectiles like Fox's and Falco's Blasters. Sheik has a very high short hop, so her SHFFL is slowed significantly. Sheik's tilts are known not only for being fast like her other attacks, but for also having long reach and juggling capabilities. Sheik is also famous for her Down Throw, which can chaingrab against much of the cast. Not only is Sheik's Up Smash quick, but it is also the second strongest in the game (next to Ganondorf's) if sweetspotted at the tip of her hands. Sheik can also Wall jump.

Although her recovery doesn't travel much distance, being a combination of relatively fast-falling speed, fairly poor air speed, and not much distance on her Up Special Move, Vanish, it has a large number of invincibility frames, and damages foes around her due to the explosion. Sheik can transform into Zelda if the player has a disadvantage as Sheik, or for her better recovery when knocked far offstage. However, Transform is fairly slow and grants few invincibility frames, allowing her to be easily punished. Pressing the Pause button, while illegal in most tournaments, allows for Sheik's transformation to be instantly finished.

Like other characters, Sheik has received some changes in the PAL version of Melee, which nerfed her overall. This is due primarily to the changes to her down throw, which caused Sheik to lose her chaingrab, some tech-chasing options, and several KO setups. Along with the nerfs to her finishers, Sheik generally has a much harder time KOing characters that she had no trouble KOing in the NTSC version, such as Peach and Marth, resulting in much poorer matchups against them.

In addition to the normal trophy about Sheik as a character, there are two trophies about her as a fighter, unlocked by completing the Adventure and All-Star modes respectively with Zelda/Sheik on any difficulty:

Sheik
This is Zelda's alter ego. Using a variation of the name of the ancient Sheikah tribe, she appears before Link and teaches him melodies instrumental to his success. It's believed that she's not just a quick-change artist, but rather that she is able to instantaneously alter her clothing and her eye and skin color by using her magical skills.

Sheik (Smash Red)
Strategically switching between Zelda and Sheik is key. Compared to her Zelda form, Sheik is nimble and has gorgeous moves, but she lacks a strong knockout attack. The number of needles thrown in Needle Storm is based on how long you hold the B Button before releasing it. Use the Control Stick to wave the Chain after brandishing it.

Sheik (Smash Blue)
The best strategy to use when playing as Sheik is to let her flow from one powerful attack into another, like a river of quicksilver. Zelda has some techniques with more punch, however, so in one-on-one battles, use Transform as needed. Sheik only travels a short way when using Vanish, but the move comes with a small explosion that damages foes around her.