Smashpedia
Register
Don't have an account?
Sign In
Advertisement
in: Characters, The Legend of Zelda universe, Stickers,
and 25 more

Sheik in her appearance in The Legend of Zelda: Ocarina of Time.

Sheik is a character in The Legend of Zelda: Ocarina of Time, and is the alter-ego of Princess Zelda. In the game, Zelda disguises herself as a Sheikah. With her voice muffled and face concealed, as well as wearing a form-fitting blue suit with the red Sheikah eye in the center, she is virtually unrecognizable.

Sheik plays the harp and teaches Link new songs to help him on his quest. When Link arrives at the Temple of Time near the end of the game, Sheik uses the Triforce of Wisdom and reverts to Zelda. It is claimed by the character's trophy in Super Smash Bros. Melee that she uses her magical skills to change her skin tone, hair length, eye color, and clothing. In addition, when hurt, Sheik is voiced by a female voice actor in both Ocarina of Time and Melee.

A popular topic in both the Legend of Zelda and Super Smash Bros. fan communities is the gender of Sheik. Many say that Sheik is merely a disguise of Zelda, but many have suggested that her masculine qualities are due to her use of the Triforce of Wisdom, as seen when Zelda undergoes her transformation into Sheik, explaining the gender alteration as an effect of magic.

The issue originates from Ocarina of Time; in the game, Link encounters Princess Ruto in the Water Temple. She asks Link to thank Sheik for saving her, referring to Sheik as "him." In addition, the non-canon manga for Ocarina of Time suggests that Zelda uses the Triforce of Wisdom to actually become male while disguised as Sheik. Zelda herself apologizes for "meeting Link in disguise", though what she means is very open to interpretation. Additionally, some argue that the Sheik "character" is male, much like some real-life cross dressers adopt opposite-gendered stage personas.

Despite this, Sheik's gender in Ocarina of Time is still occasionally argued, however, Sheik is definitely considered a female in the Super Smash Bros. series. Several examples include that Sheik's Melee trophies describe her as being female, that Masahiro Sakurai refers to Sheik as female in her update on the Smash Bros. DOJO!! website, and that she is referred to as female within both Brawl and its manual. Since Sheik does not actually appear in Twilight Princess and only Smash Bros., this statement by Sakurai regarding the non-existent Twilight Princess Sheik's gender must in effect be taken as canon. 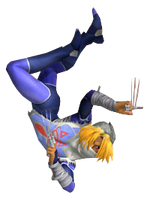 Sheik is one of the new characters introduced in Super Smash Bros. Melee. Rather than being added as a full-fledged character, she is a transformation of Zelda. Zelda is the only character in Melee to possess such an ability. Her design is based off The Legend of Zelda: Ocarina of Time.

Sheik's Special Moves are rather diverse. Her Neutral Special Move, Needle Storm gives her arguably one of the best projectiles in the game. Not only are they quick to charge, but she can save her needles and continue charging them whenever she is given time to do so. Her Side Special Move, Chain, can be useful to avoid approaches, but it has some lag. Her Up Special Move, Vanish, while not possessing Farore's Wind's reach, can still be useful as a recovery move.

In addition to the Zelda trophies, there are three Sheik trophies available in Melee.

Sheik
This is Zelda's alter ego. Using a variation of the name of the ancient Sheikah tribe, she appears before Link and teaches him melodies instrumental to his success. It's believed that she's not just a quick-change artist, but rather that she is able to instantaneously alter her clothing and her eye and skin color by using her magical skills.

Sheik [Smash]
Strategically switching between Zelda and Sheik is key. Compared to her Zelda form, Sheik is nimble and has gorgeous moves, but she lacks a strong knockout attack. The number of needles thrown in Needle Storm is based on how long you hold the B Button before releasing it. Use the Control Stick to wave the Chain after brandishing it.

Sheik [Smash]
The best strategy to use when playing as Sheik is to let her flow from one powerful attack into another, like a river of quicksilver. Zelda has some techniques with more punch, however, so in one-on-one battles, use Transform as needed. Sheik only travels a short way when using Vanish, but the move comes with a small explosion that damages foes around her. 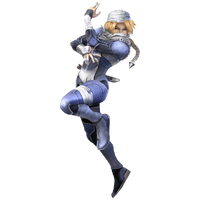 When Princess Zelda was confirmed as a playable character in Super Smash Bros. Brawl, players were introduced to a redesigned Zelda based off the model that was drafted for The Legend of Zelda: Twilight Princess. This Twilight Princess-influenced incarnation of Zelda led to many debates about whether or not Sheik would return. On one side of the argument, many claimed that because Sheik did not appear in Twilight Princess, Zelda should not be able to transform into Sheik. Many cited the fact that Link's special moves were reworked to feature more Twilight Princess-related qualities as evidence that the latest entry in the Legend of Zelda franchise would be the game focused on in Brawl.

On the other side, many felt that the Zelda in the Super Smash Bros. series was not supposed to be any specific Zelda from the Legend of Zelda series; rather, she was an amalgam of all Zeldas, past and present. Since this Zelda has already exhibited the ability to transform into Sheik, there should be nothing preventing her from retaining this trait in Brawl.

The debate was settled with the revelation of Sheik's inclusion in Famitsu's review of Super Smash Bros. Brawl. Shortly thereafter, the official Super Smash Bros. website confirmed Sheik with its January 16 update. Sheik's special moves have not been changed, though she now uses a slightly different, Twilight Princess-inspired design. Of note is the fact that design was sent to Sakurai by Eiji Aonuma, director of Twilight Princess; it was initially created for Twilight Princess, but plans to bring Sheik back were later scrapped, rendering the model obsolete until the development of Brawl.

Sheik's play style is still incredibly similar to her debut in Super Smash Bros. Melee, but seeing as she lost a lot of her KOing power, Sheik is not quite as deadly as before. However, Sheik's still an agile character with great combo ability and a force to be reckoned with.

Sheik has a trophy that is awarded each time the Classic Mode is completed with Sheik on any difficulty. See Light Arrow for the trophy description of Sheik's Final Smash:

Sheik
The persona Zelda adopted to escape from Ganondorf. She completely hid all traces of her Zelda identity and appeared to Link as the last member of the Sheikah tribe. She taught Link essential ocarina melodies and then vanished in an instant. She didn't appear very often rather, she would show up to support Link in crucial situations. 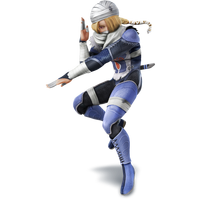 Sheik returns as a playable character in Super Smash Bros. for Nintendo 3DS and Wii U. Unlike her previous appearances, however, she is her own separate character from Zelda. She gained two new special moves to replace some of her old moves, Burst Grenade as her side special to replace Chain, and Bouncing Fish as her new down special, overall giving her more reliable special moves.

Sheik
In The Legend of Zelda: Ocarina of Time, Sheik claimed to be a surviving Sheikah. However, this was just a cunning disguise for Princess Zelda so that she could escape Ganondorf. In Smash Bros., she's the complete opposite of Zelda, striking with fast attacks that can keep an opponent off balance.

Sheik (Alt.)
Sheik's Burst Grenade side special throws a small grenade that draws in nearby fighters before exploding. Once the button has been released, it'll hop or explode after a time. The down special Bouncing Fish is an attack where Sheik strikes with both heels, falling similarly to the way a fish might flop around.