Banned
Shadow Moses Island (シャドーモセス島, Shadō Mosesu Tou?) is a stage in Super Smash Bros. Brawl and returns in Super Smash Bros. Ultimate, developed by Hideo Kojima. It was officially recognized in the October 2, 2007 DOJO!! update, having appeared before that in many trailers and screenshots.

The stage features giant watchtowers as destructible walls, as well as a spotlight that generates the infamous "!" over a player's head and the also infamous "Discovery" sound if it shines on them (although it does not affect the players, and it is not meant to be a threat). The stage also features a random Metal Gear that will occasionally jump out from the background: Metal Gear REX, Metal Gear RAY, or two GEKKOs. They do not interact with or affect the gameplay, and they do not attack other opponents. When a GEKKO jumps onto the wall of the stage and tries to get in, it always fails, and falls into the dark red abyss mist below, but still gets back up, unharmed or undamaged. When the stage's watchtowers are broken down, the edges of the stage are exposed, making it more difficult for lighter characters to stay alive. They have two sections each; if the bottom section is destroyed, the top section will collapse as well, but the bottom section can stand without the top. After about a minute or two, a broken watchtower (if the entirely is shattered, not just the top) will resurrect, forcing all edge-bound characters back into the center. However, though generally unknown, most characters can get over the towers by jumping multiple times as a watchtower is resurrected. The walls can also be bypassed by using a Warp Star near the sides and tilting past them. The characters will remain trapped (and largely unreachable) until the towers are destroyed again. Star KO's are banned in Super Smash Bros. Ultimate due to the background wall, even with hazards.

When Solid Snake uses his codec on this stage, his teammates (Otacon, Mei Ling, and Colonel Roy Campbell) will communicate with him via Codec and give him information about fighters he's playing against, similarly to Fox, Falco, and Wolf's Smash Taunt. There is also a Codec transmission in which Slippy appears and tells Snake all about Falco. If Snake is KO'ed while talking on the Codec, the person on the other end of the codec line then stops their speech and utters the infamous "SNAAAAAKE!" Game Over scream.

The exterior of this stage, which is inaccessible in the game by normal ways, can be seen in this video .

The amount of snowfall on the stage is random, although some believe it varies depending on the music chosen.

Shadow Moses Island is banned in tournaments because of unfair advantages such as repeated abuse of chaingrabs (more notably in the case of King Dedede's chaingrab) against the watchtowers, the difficulty of landing horizontal KOs (meaning that players would have to resort to Star-KOs) and the removal of the bottom blast line, thus renderring spikes, edgehogs and similar techniques virtually useless.

The Shadow Moses Island stage draws its inspiration from Metal Gear Solid. The stage is made to resemble the helipad in front of Shadow Moses Island's nuclear weapons disposal facility's tank hangar. It is one of the first areas Snake ventures through in the facility, although it has some differences in Super Smash Bros. Brawl, such as the lack of the crawlspace, no staircases, the truck that was parked in front of the building is gone, and the height of the searchlight towers has been extended.

The stage's name is that of the fictional island the nuclear disposal facility is situated on. The island is revisited by Old Snake in Metal Gear Solid 4: Guns of the Patriots where it has been abandoned by its original staff and fallen into disrepair.

Metal Gears weapons from the series appear in the background of the stage such as Metal Gear REX, Metal Gear RAY and a pair of Gekkos. REX, as seen in MGS1, was a nuclear equipped battle tank designed by Hal "Otacon" Emmerich, who was deceived into believing that he was designing a defense system. The machine was taken control of by Liquid Snake, before being disabled by Solid Snake with assistance from Otacon. Many years later, Snake returned to Shadow Moses Island to prevent Liquid Ocelot from stealing REX's railgun for his own ends, and would later pilot it himself against Liquid. RAY was an anti-Metal Gear machine designed by the US Marines to fight against derivative Metal Gears. The manned Marine Corps version of RAY was stolen by Revolver Ocelot, and the Patriots later created an army of unmanned units to defend their Arsenal Gear creation. Raiden would do battle against 25 unmanned RAYs during the events of MGS2 and many years later with his upgraded cyborg body and high-frequency sword, destroy a modified RAY on foot during the prologue of Rising. The Gekkos of MGS4 are mass-produced Metal Gears distributed among various PMCs, posing considerable threat even when lacking nuclear strike capability. Snake came across several Gekko variants during his many missions during the game, as did Raiden in Rising. 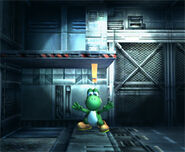 The searchlight having found Yoshi. 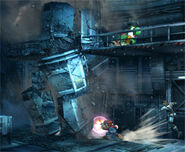 One of the towers being broken apart. 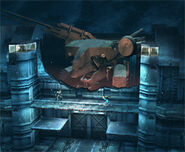 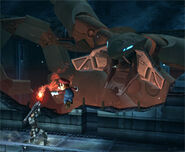