Shadow Blade is Mega Man's Neutral Special Move that can be used via Customizations. Mega Man throws a shuriken which acts like a boomerang. It can be thrown in 8 directions. However, it doesn't stick in the ground and cannot be used as an item, it also has a noticeable slower deployment than the Metal Blade.

In Mega Man 3, Mega Man receives this weapon from Shadow Man. It is Spark Man's weakness and works similarly to its original use, with the change of the original five directions upgraded to eight. It has also appeared in Mega Man 2: The Power Fighters along with the Plant Barrier.

The Shadow Blade works like a boomerang, returning to Mega Man after reaching a set distance. This distance is quite short, so the move is best used at a pretty close range. The move hits both on the way out and back, so opponents are hit multiple times if caught in it. The hit on the way back will knock opponents slightly towards Mega Man, so there may be some combo options available like Shadow Blade to down tilt or neutral attack, followed by a dash attack or two. If Mega Man is standing on an edge and throws the Shadow Blade down, it will travel down below the ledge a set distance and then back up to Mega Man; this can be used as a method of edge-guarding if timed correctly. It can be thrown in eight directions, just like Metal Blade. However, the move doesn't deal very much damage. 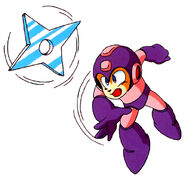