Shadow Ball (シャドーボール, Shadō Bōru?) is Mewtwo's Neutral Special Move. The move itself consists of Mewtwo concentrating Shadow energy into a round ball to toss at opponents. Mewtwo can save the charge by pushing the shield button, grab button, or moving left or right to roll in the desired direction. He can even charge this in the air, and even when it's fully charged he will still hold it until it releases it or moves. In Melee the charge can damage and trap the enemy inside it. This move is similar to Lucario's Aura Sphere move.

Once fired, the ball will travel in an erratic fashion, which may cause it to miss its target entirely. A fully charged Shadow Ball does 25% damage, has a great deal of knockback, and explodes on contact with a surface.

The move has a considerable amount of recoil, especially when used in midair, so one must be careful not to use it too close to the edge. This recoil can also be used as a horizontal recovery tactic on stages with huge boundaries like Dream Land 64 and Final Destination. 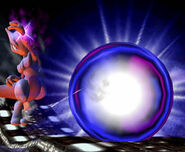 Mewtwo using Shadow Ball in Wii U/3DS.
Add a photo to this gallery

Shadow Ball is an attack in the Pokémon games introduced in Generation II. It is a powerful Ghost-type move with a chance of lowering the foe's Special Defense, which was ironic, since Ghost was considered a Physical type until the Special-Physical split in Generation IV. While Mewtwo is not capable of learning it naturally, he can learn it via Technical Machine 30, which has contained Shadow Ball from Generation II to Generation VII and with Technical Record 33, which contains it in Generation VIII. He also uses the attack (or an attack very similar to it, it wasn't confirmed) in Pokémon: The First Movie to attack Mew. Mewtwo also uses this attack in the Pokémon movie titled Mewtwo Returns. Shadow Ball does not require the user to charge it up in the Pokémon games.

Retrieved from "https://supersmashbros.fandom.com/wiki/Shadow_Ball?oldid=589736"
Community content is available under CC-BY-SA unless otherwise noted.