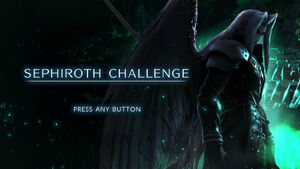 The Sephiroth Challenge was a limited-time event for Super Smash Bros. Ultimate where players could face Sephiroth in a Stamina match in three difficulty options. Successfully defeating Sephiroth unlocked him, as well as his stage Northern Cave and the accompanying music prior to his proper release to the wider public on December 22nd, 2020.

The one-on-one match against Sephiroth takes place in the Northern Cave and lacks any items. The amount of HP he has depends on the difficulty; on Easy Sephiroth will have 100HP, 150HP on Normal, and 200HP on Very Hard, while the player will always have 150HP regardless of difficulty. Northern Cave would be in its standard form on Easy and Normal, but be in its Omega form on Very Hard.

Successfully beating the challenge would not only unlock the contents of Challenger Pack 8, but will also allow the player to share the elapsed time to the internet.

The mode ran from December 17th until December 22nd at 5:00 P.M. PST / 8:00 P.M. EST and was only accessible to those who purchased either the Fighters Pass Volume 2 or Challenger Pack 8. During the time period, the challenge could be freely replayed an infinite amount of times. Since December 22nd, the mode has disappeared forever.

Retrieved from "https://supersmashbros.fandom.com/wiki/Sephiroth_Challenge?oldid=598651"
Community content is available under CC-BY-SA unless otherwise noted.