Scizor, when summoned by a thrown Poké Ball, uses Metal Claw as its attack. Scizor runs forward for a short moment, then jumps straight up and falls down, eventually off the bottom of the screen. Its role is similar to Hitmonlee's in Super Smash Bros.; any character that makes contact with Scizor will receive heavy damage. Scizor also forces characters to the top of the screen if the character makes contact with it.

Scizor features as a collectible trophy, unlocked as one of the 100+ trophies that can be collected randomly during normal play, such as in the Trophy Lottery and throughout the various Single-player Regular Matches. It reads as follows:

Scizor:
This Scissors Pokemon, the evolved form of Scyther, has arms ending in large, strong pincers with distinctive eye-spot markings. It's unable to fly very far with its undersized wings, but it can affect its body temperature by flapping them at high speeds. Its sleek look has made Scizor quite the popular catch among collectors. (Pokemon Gold & Silver 10/00)

NA: Is that a three-headed monster!? No wait... the left and right heads are actually claws! Creepy. Most creatures that have face-like patterns to use them defensively to give themselves a chance to flee. Scizor throws that idea away and uses them to scare foes while it attacks!

PAL: It may look like this Pokémon has three heads, but that's just what it wants you to think. Look closer and you'll see that two of them are actually claws. Most creatures with face-like markings use them to scare predators to give themselves a chance to run away, but Scizor seems more likely to attack while its foe is stunned! 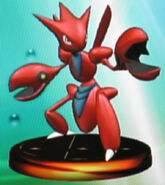 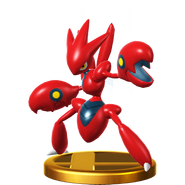 Scizor's Trophy in Super Smash Bros. for Nintendo 3DS and Wii U.
Add a photo to this gallery
Retrieved from "https://supersmashbros.fandom.com/wiki/Scizor?oldid=561990"
Community content is available under CC-BY-SA unless otherwise noted.