General artwork of Sandbag in SSB4.

Sandbag's most important appearance is in the Home Run Contest, a minigame where players are given 10 seconds to rack its damage up and hit it as far as possible using a Home-run Bat. In this game, Sandbag has a visible damage percentage, and flies farther when hit at higher percentages, much like characters do. When hit off the starting platform, the camera follows Sandbag until it lands and stops moving. According to its Melee trophy description, Sandbag is not hurt by attacks, and 'loves to see players wind up and let loose'.

In Melee, Sandbag is technically defined as a non-playable character, and therefore can be grabbed and thrown by players, and it is programmed not to move. Although Sandbag cannot normally be controlled by human players, it is possible to circumvent this through the use of Action Replay. Doing so allows players to control it and make it move and jump, however, attempting to make it attack causes the game to freeze, and has other problematic effects. Using moveset swap hacks, it is possible to give Sandbag the moves of a playable character. However, attempting this may still cause the game to freeze. As a character, Sandbag is unusual in that it cannot be KOd. This is because the only stage on which it is meant to be found is the Home-run Stadium.

In Brawl, however, Sandbag is defined as an item, and therefore cannot be grabbed by regular or special grabs. It can be eaten by Kirby and King Dedede's Inhale, and Wario's Chomp, but only during matches. As well as its appearance in the Home Run Contest, Sandbag may appear as an item during matches. It may release more items when characters hit it. In matches, Sandbag takes little horizontal knockback and cannot be KOd by the upper blast line. Sandbag also appears in the Waiting Room, where players may practice on it while waiting for online matches to start.

In SSB4, Sandbag reprises its role as an item. It once again appears in Home-Run contest, and in a waiting stage when waiting for an online match to begin. Unlike in Brawl, however, Sandbag can no longer spawn CDs.

In Melee and Brawl, the Sandbag trophy is obtained by completing the Home-Run Contest with every character. Note that characters who may be switched during matches, namely Zelda and Sheik, Samus and Zero Suit Samus, and the Pokémon Trainer's Pokémon, need not all be used; one each is sufficient. However, the Sandbag trophy does not have unlocking criteria in SSB4, and can be earned randomly.

Sandbag's cute appearance and comical role in the series has earned it a fanbase. This fanbase was enough to get Sandbag into the bracket for GameFAQs 7th character battle. Sandbag made second place in the first round, but was defeated in the second round.

Sandbag is used in CD Factories, a type of custom stage made using Brawl's Stage Builder that abuses the Sandbag's tendency to drop Stickers and CDs when all other items are disabled.

There is a glitch that causes Sandbag to become invisible in Brawl. To perform this glitch, hit Kirby while he is swallowing a Sandbag. 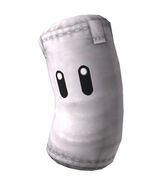 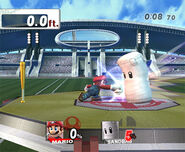 Sandbag as seen in Brawl's Home-Run Contest.
Add a photo to this gallery

Sandbag exists for one reason only: to get smashed in the Home-Run Contest. Pound on Sandbag as much as possible in the time allotted, then swing for the fences as you compete for the longest home run of all time. Getting hit doesn't hurt Sandbag at all. As a matter of fact, it loves to see players wind up and let loose.

An item that appears in the Home-Run Contest, where the goal is to do lots of damage to Sandbag, then send it flying as far as you can. It also appears in the regular game. If you smash it, a storm of confetti and items will burst out. Sandbag doesn't feel pain, though; in fact, it's happy to be of service.

This little guy makes a great sparring partner. No, really! In Home-Run Contest you'll send it flying, and in normal battles it has a habit of dropping items when you lay into it. Sandbag seems pretty content with being your punching bag, so it'd almost be mean not to go all out on it.

Sandbag's trophy in "SSB4"
Add a photo to this gallery
Retrieved from "https://supersmashbros.fandom.com/wiki/Sandbag?oldid=507659"
Community content is available under CC-BY-SA unless otherwise noted.