This article is about Samus's appearance in Super Smash Bros. for Nintendo 3DS and Wii U. For other uses, see Samus.

Samus is a starter character and returning veteran in Super Smash Bros. for Nintendo 3DS and Wii U. She is one of the "Original 12" characters that have appeared in every Smash Bros. installment. While her moveset has been kept pretty much the same, a notable difference is that she no longer can transform into Zero Suit Samus, who is now a separate character.

Samus is a relatively balanced character in terms of gameplay. While neither her melee combat and ranged arsenal gives her much advantage over opponents, she has solid moves that allows her to play both defensively and offensively.

Boasting from having the highest ranged grab in the game and the second fastest pummel, Samus can approach and punish enemies from considerable distance. Her Down Throw is a great combo starter, which can connect into many of her aerials, such as Forward Aerial and Up Aerial. Depending on the opponents actions and DI, it is even possible to hit with her Up Smash should the opponent fast fall after the Down Throw.

Samus recovery is also very good. Screw Attack has very high priority, thus preventing opponents from trying to intercept her recovery, and has great ledge sweetspot range. She also has the longest tether recovery in the game, as well being able to wall jump, which further increases her recovery. Because of this, Samus is capable of gimping opponents and following them offstage to land Meteor Smashes and other attacks, and the safely returning to the platform.

Her flaws, however, lies in her lack of good finishing moves, as many of them require sweetspotting and/or lack enough knockback to reliably KO even at percentages above 150%. Her Down Smash has one of the worst knockbacks in the game, although it sends opponents horizontally, while her Down Tilt can only KO at percentages above 180%. This combined with considerable low range and poor hitboxes for some moves makes KO'ing very hard for Samus, specially against characters that can react faster to her attacks.

On the other hand, Samus can control her space very well with various tools at her disposal, which not necessarily allows her to win the game, but give her considerable higher chances of landing her few KO moves. Her Missiles and Bombs can both serve as obstacles in the battlefield, while her Grab Aerial is a move with transcending priority that is fast enough to be a surprise attack, allowing her to to inflict considerable hitstun from safe distance to string combos and even score some gimp kills. This allied with her Missiles and Bombs makes her combo potential very versatile.

A good Samus player must know when to charge in and when to retreat, zoning the opponent until a window of opportunity appears to land combos and powerful attacks. Since in Smash Bros. the knockback of projectiles is higher the closer the character is to the opponent, using Super Missiles and Charge Shots at close range can even score early KOs.

Samus received a balance of buffs and nerfs to both ranged and melee attacks. Her KO power has increased significantly for some moves, as well improved hitboxes for her moves that allows for better combos. However, the KO power for other moves has been reduced to compensate. She is also no longer capable of transforming into Zero Suit Samus, who is now a separate character.

Appearance-wise, Samus' Power Suit is now based on her design from Metroid: The Other M, with a more round silhouette, smaller shoulderpads and a slightly feminine build. Some of her animations have been tweaked or completely changed to reflect her animations in The Other M. Her missiles and bombs also have different designs. Her sound effects are based on her sounds in Super Metroid, which is mostly noticeable in her walking, dashing and jumping.

Down Tilt Side Smash:

Up Tilt Side Smash:

Samus uses her Grapple Beam to grab opponents from a distance and can also use it for tether recoveries.

Samus Aran is known for her numerous battle across alien planets in the Metroid series. She wears a Power Suit designed by the Chozo, giving her incredible versatility in a fight. She can wade in with kicks and punches, but she favors beams and missiles. A fully charged Charge Shot packs a serious punch!

Samus protects herself from overhead enemies with her up smash, Cover Fire, which can land multiple hits on anyone it connects with. Samus also fires a homing missile by holding sideways and pressing the special- attack button or launches a Super Missile by quickly tapping sideways instead.

When most people think of Samus, they think of her wearing the Varia Suit. It not only grants her power far beyond her own physical strength but also can unleash a deadly array of beams from the Arm Cannon. And, in a feature quite unique to the Metroid series, it lets her morph into a ball instead of having to crawl!

Power Suits aren't known for being good in water, so if you're the aquatic type, what you need is a Gravity Suit. This stylish, glowing suit upgrade not only completely nullifies fluid resistance--making moving underwater a breeze--but also reduces damage and improves your underwater vision. What more could you ask for? 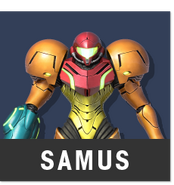 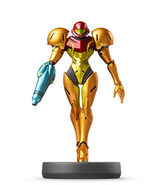 Retrieved from "https://supersmashbros.fandom.com/wiki/Samus_(Super_Smash_Bros._for_Nintendo_3DS_and_Wii_U)?oldid=494891"
Community content is available under CC-BY-SA unless otherwise noted.