Samurai Goroh (Japanese:サムライ ゴロー, Samurai Gorō), is a rival racer to Captain Falcon in the F-Zero series of futuristic Nintendo racing games. He has featured as a collectible trophy in Super Smash Bros. Melee, and more recently he has appeared as an Assist Trophy in Super Smash Bros. Brawl. Samurai Goroh was the first F-Zero franchise update on the DOJO!!, and when first revealed, his name was spelled without a H (Samurai Goro), but this was changed the following day.

Samurai Goroh appears the Super Smash Bros. Melee opening FMV in a heated two-way race with Captain Falcon ramming their respective racing machines into each other on the Mute City track, but the Blue Falcon is able to send the Fire Stingray flying off the track and crashing into the camera. Samurai Goroh also appears as a collectible trophy along with his racing machine, the Fire Stingray, which is also seen in the two F-Zero-themed stages in the game.

Samurai Goroh features as a collectible trophy, unlocked as one of the 100+ trophies that can be collected randomly during normal play, such as in the Trophy Lottery and throughout the various Single-player Regular Matches. It depicts both Goroh and his racing machine, the Fire Stingray. It reads as follows:

Samurai Goroh
A rival bounty hunter, Samurai Goroh has crossed paths with Captain Falcon in many a dark corner of the universe. He also goes head-to-head with Falcon in F-Zero races, so the threads of their fates seem to be deeply intertwined. Samurai Goroh is famous for his katana, and his signature T-shirt is instantly recognizable. (F-Zero, 8/91) 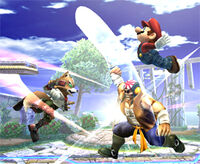 Samurai Goroh makes his gameplay debut as a computer-controlled Assist character in Super Smash Bros. Brawl as one of the many secondary Nintendo characters that can appear from the Assist Trophy item in battle. When released, he uses his katana to slash at opponents.

A man who presents himself as a bounty hunter much like Captain Falcon but is also the boss of a notorious bandit group. He tries to collect criminal bounties but always fails to beat Captain Falcon to the collar. He considers himself Falcon's arch-rival and always tries to beat him in F-Zero races. His machine, the Fire Stingray (#05), has a high top speed.

Samurai Goroh returns as an Assist Trophy in Super Smash Bros. (Wii U and 3DS). He appears to perform the same actions as he does in Brawl.

This infamous pilot considers himself to be Captain Falcon's main rival. His racing machine, the Fire Stingray, is incredibly fast. If summoned into battle, he'll head toward the nearest opponent and slash with his katana. He definitely makes a better friend than foe!

Retrieved from "https://supersmashbros.fandom.com/wiki/Samurai_Goroh?oldid=562399"
Community content is available under CC-BY-SA unless otherwise noted.