Ryu (Super Smash Bros. for Nintendo 3DS and Wii U)

This article is about Ryu's appearance in Super Smash Bros. for Nintendo 3DS and Wii U. For other uses, see Ryu.

Hiroki Takahashi
Ryu(リュウ, 隆, Ryū) is the main character from Capcom's Street Fighter series. He is a downloadable character in Super Smash Bros. for Nintendo 3DS and Wii U, and the fifth non-Nintendo character to appear in the series, following Solid Snake, Sonic the Hedgehog, Mega Man and Pac-Man. He was shown in a leak showing actual gameplay of him, and then officially confirmed during Nintendo Direct on June 14. He became available for download in June 14, 2015, alongside Lucas and Roy.

He currently ranks 12th on the tier list due to having one of the largest combo potentials in the game; different button commands give him a much wider range of attacks than most other characters. Many of his attacks are strong and have high priority and low lag, and he has spacing and approach options with Hadoken and Tatsumaki Senpukyaku. He also has powerful finishers, the most famous being his Up special, the Shoryuken. Lastly, Ryu has a strong and varied recovery, as all of his special moves can be used to aid him back to the stage. However, Ryu suffers from a mediocre approach, a poor grab game, and polarized air movement due to having the lowest air acceleration in the game (despite his good air speed). Ryu also has an extremely high learning curve due to the dexterity required to consistently execute his combos.

Ryu's gameplay has one of the most unique mechanics of all characters in the Smash series; his controls replicate the control scheme of the Street Fighter series, where players fight using 6 buttons for weak, medium and strong attacks. Since the Smash Bros. series uses only two buttons for attacks (one for normal attacks and other for Special Attacks), players can use different attacks depending on how long the attack button is pressed (tap for a weak attack, and hold for a strong attack). The light versions of these attacks are good for combos but don't deal much damage, while the heavy variations have good launch and damage to them and can be good for spacing but are not as good for combos. Also, all but his Down Special Move can be used by inputting using half and quarter-circles for a stronger variation of just pressing the B button.

His combo potential is one of the most versatile in the game, with many of his attacks being able to chain together depending on how long the player presses the button, whether they tap it or press and hold it. Those attacks also deal a good amount of hitstun, allowing players to keep combos going.

Ryu's ground attacks are among his best combo tools because of the heavy and light variations many of them possess. Ryu's light jab is a good combo finisher, comes out fast, and deal some great damage when all three hits connect. His heavy jab is a clunky move that can be useful for spacing because of its range and launch power but is otherwise not very useful. Ryu's light forward tilt comes out relatively fast and can be good for combos in some situations. The heavy forward tilt on the other hand is a powerful move known as the Collarbone Breaker. This move has good range to it as well as good knockback; it hits twice and as we all know, is capable of breaking shields; the move does, however, have some start-up lag to it. The light up tilt is a very fast attack that can block projectiles and trap opponents in at low to mid-percentages. The heavy up tilt combos out of light up tilt and is good for dealing with opponents approaching from above. The light down tilt is a great combo starter; it combos into itself, heavy down tilt, and True Hadoken. The heavy down tilt is good for spacing on the ground and combos out of light down tilt; it can also combo into True Hadoken, but has a bit more launch to it, so combos at higher percentages can be harder to accomplish. Ryu's dash attack is a great approach option and can set up some aerial combos.

Ryu's aerials are great tools for juggling opponents, comboing them in the air, and then edge-guarding them. Ryu's neutral air has very little range but can start and continue combos; short-hopping a throwing out a neutral air can combo into a heavy jab. Ryu's forward air is great for edge-guarding, spacing, combos, and racking on damage. Ryu's back air is good for edge-guarding because of its high launch, which makes it a good killing move as well. Ryu's up air hits twice; it is good for putting on damage, juggling, and can kill at later percentages. Ryu's down air is useful for edge-guarding and can continue combos in the air, though its high launch will prevent combos to continue with this move at higher percentages.

Ryu's throws are not the best, but do have some uses. His down throw is a good combo starter. His up throw can get opponents into the air for some follow-up attacks. His forward and back throw are good for getting opponents off-stage.

Hadoken is a pretty slow projectile but increases in speed and distance the longer a player holds down the button; Ryu can only have one Hadoken out on the stage at a time, so the move cannot be spammed and has some lag on it. It is a great projectile though, keeping opponents at bay and dealing some good damage; the hitstun on it can set up some combos at closer range. The True Hadoken is probably the easiest of the Street Fighter combo inputs to perform. Just input straight down and then roll the control stick to be horizontal in the direction Ryu is facing. The True Hadoken deals more damage and moves faster and is just as good for combo setups as the regular Hadoken. The Shakunetsu Hadoken is a bit tricky to perform. The move multi-hits and carries opponents away, and can be good for shield pressure, so of course a player will want to use it if the opportunity arises. Here is a tip for the input. Jump straight up, then roll the control stick counter clockwise (or clockwise if Ryu is facing left) until the control stick is horizontal and in the direction Ryu is facing. Then, just as the control stick aligns in the correct position, press the standard attack button.

Tatsumaki Senpukyaku has a multitude of different uses. It provides Ryu with a horizontal recovery, can kill around 140%, hits on both sides of Ryu, and can rack on good damage. However, the ending lag on the move can leave Ryu open for punishes if it doesn't connect. The True Tatsumaki has greater kill power than the regular version; to input this move, just roll the control stick in the opposite direction that Ryu is facing in after inputting it downwards. This version of the move should not be used for recovery because a misinput could spell death for Ryu; players don't have time to fumble for a complicated input when the main concern is getting back to the stage.

Now for the Focus Attack. This is potentially one of Ryu's best special moves if one knows how to use it. At low charge the move won't stun for long and will only cause some minor knockback. At high charge it can stun opponents long enough for a follow-up attack. Some attacks that combo out of Focus Attack are down smash, forward smash, heavy forward tilt, light and heavy down tilt, and at high percentages, the True Shoryuken paired with this move is a certain kill move. Inputting the True Shoryuken input immediately after the Focus Attack connects will result in the move being used, even if Ryu didn't dash out of the attack animation. Focus Attack will also allow Ryu to take one attack, so if an opponent is charging up a smash attack or going for a dash attack, this move can be a player's best friend. It also opens up movement options and mindgames because Ryu can dash out of the attack animation to cancel it. If Ryu start up the attack but the opponent is not in range, dash out of the animation to avoid getting punished.

As for his finishing moves, his Forward Smash, Back Aerial and Down Aerial (if sweetspotted) are his strongest normal attacks, while True Shoryuken is his most powerful attack overall.

One of Ryu's flaws, however, lies in his poor reach, even with the B button being held to extend the range. His Hadoken also cannot be spammed like other projectiles, functioning much like Bowser Jr.'s Cannonball: can only be used after the projectile disappears. This gives Ryu trouble in zoning, forcing him to go offensive more often.

The Negative Edge is a technique used in the Street Fighter series that also shows up in Super Smash Bros. for Nintendo 3DS and Wii U excusively to Ryu, it's a easier way to use his input Specials. It's done by holding A or B, doing the input of the Special Move you want to use and releasing it.

Ryu visits from the Street Fighter series! Ryu’s fighting style is based on karate, but he’s mixed in some other martial arts to make his own unique style. In Smash, he will perform either weak or strong attacks depending on if you press or hold down the buttons. His special attacks also have three power levels!

Ryu’s Focus Attack move lets him withstand a blow and then counterattack.The longer you hold it, the longer your enemies will be stunned if you hit them. If it hits a standing enemy, the enemy will become defenseless. When that happens, cancel your Focus Attack and unleash a sick combo!

Use this attack when Ryu is far away from an enemy to unleash a Shinku Hadoken that penetrates through the stage. But if you use it when Ryu is close to an enemy, he’ll unleash a Shin Shoryuken uppercut attack. When it hits, Ryu will follow up with his other fist and launch the opponent up, up, and away! 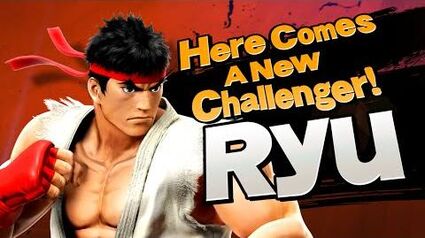 Ryu along with Toon Link.

Ryu along with Kirby in the Suzaku Castle stage.

Ryu along with Mega Man.