Ryu is the poster mascot and main character of the Street Fighter series, and is typically entangled in whatever plots take place behind the scenes of most of the games, spurring from villains interested in Ryu's innate power. His main rival is his best friend Ken Masters.

Throughout the series, Ryu continues the wander the Earth in search of new challenges and further self-improvement as a warrior. He is usually a silent, friendly and humble warrior, who finds enjoyment in battle and seeks a good fair fight with others, usually imploring them to improve as well. He does not care for rewards and material possessions, as seen in his ending in Street Fighter II where he does not show for the award ceremony, instead immediately heading out to find a new challenge elsewhere, stating that "the fight is all." Ryu's search for a good fun fight even seems to extends to the world of pro wrestling. In one of Hugo's random endings in Second Impact, he chooses Ryu as his tag team partner, who expresses excitement about their opponents, and in Hugo's Third Strike ending, Ryu seems to enjoy being a pink shirt-clad part of Hugo's independent wrestling association, much to Ken's shock.

Despite this, however, there is a darker side to Ryu. Though he drives to succeed and become stronger than yesterday, this drive veers close to the temptation to win at any cost and its relation to a malevolent inner energy within his soul called the Satsui no Hado (殺意の波動, Satsui no Hadō?, "Surge of Murderous Intent"), a force that grants immense power to the user but erodes their sense of morality and humanity as it taps into the darker nature of human instinct. Ryu's nemesis, Akuma, continuously attempts to force Ryu to succumb to it so as to have a worthy rival to fight to the death with. In most games, this manifests in an alternate playable form of Ryu called "Evil Ryu", who typically sports a darker colour scheme or character design to his normal counterpart and uses some of Akuma's moves including the "Shun Goku Satsu" killing technique. Canonically, Ryu has only succumbed to the Satsui no Hadou once, in his first fight against Sagat. Evil Ryu made his playable debut in the US version of Street Fighter Alpha 2 and sporadically made appearances in crossover games, more recently appearing in Super Street Fighter IV: Arcade Edition and Ultra Street Fighter IV. By Street Fighter V, Ryu has mastered the "Power of Nothingness" Mu no Ken (無の拳, Mu no Ken?, "Fist of Nothingness") and expelled the power of Satsui from himself. The power briefly takes a physical form in the real world, taking the form of a demonic Ryu doppelganger named Kage and the monster goads Ryu into fighting him and welcoming chaos, but Ryu merely tells the creature to do as it pleases. Ryu's seeming indfference confuses and enrages Kage and causes the monster to disintegrate.

Ryu was an orphan, found and trained by the Ansatsuken martial arts master Gouken. During his training Ryu also fought alongside and became friends with an American student, Ken Masters, who was sent to Gouken's dojo by his father to learn humility and discipline. Ryu and Ken became firm friends and frequent rivals as well.

Eventually, the two came of age and took part in the first World Warrior fighting tournament, the setting of the first Street Fighter game. Ryu defeated all challengers that came his way, eventually coming face to face with the tournament's champion Sagat, the "King of Muay Thai." Sagat's power proves too much for Ryu, who briefly succumbs to the power of Satsui no Hado and scars Sagat's chest with a deadly Metsu Shoryuken, securing the win but earning him Sagat's hatred for a long time to come.

in the Alpha series (Zero series in Japan), Ryu returns home to find his master Gouken seemingly murdered. Learning that Gouken's supposed killer was his own brother Akuma (known as "Gouki" in the Japanese version,) Ryu searches for him, eventually confronting Akuma on the island of Gokuentou. Akuma tells Ryu of the Satsui no Hadou within him and escapes.

Ryu reunites with Ken and spars with him, but Ryu is still troubled by his encounter with Akuma. Sensing this, Ken gives Ryu his red headband as a reminder to stay focused, an act which Ryu is grateful to, eventually donning the headband. Ryu also meets a young schoolgirl, Sakura Kasugano, who wants to train under him. Ryu refuses, as he feels he still has far too much to learn yet, though he takes a photo with Sakura as a memento. He also has a rematch with Sagat, who he lets win feeling that Sagat was still not fully recovered from their last battle. Though victorious, Sagat realizes that Ryu held back.

Unfortunately, Ryu is later targeted by the insane Shadaloo warlord M. Bison ("Vega" in Japan) who seeks to use Ryu's Satsui potential to amplify his own Psycho Power and thus help him conquer the world. Though Ryu is warned of Bison by the mysterious Italian fortune teller Rose, he is unable to avoid confrontation with him and Bison brainwashes Ryu into his mindless slave, though he is eventually freed by the combined efforts of Ken, Sakura and Sagat. Ryu temporarily defeats and destroys Bison, though the latter transfers his soul into Rose and later into a spare body.

Ryu also takes part in the second World Warrior tournament seen in Street Fighter II where he battles Ken once more. Although its not known how far Ryu got into the tournament, it is implied that he lost to Ken.

Ryu's journey continues in the next canon installment, Street Fighter IV. He once more reunites with Ken and Sakura as well as Sagat, who's hatred for Ryu has almost completely vanished and given way to a more friendly rivalry than before. However, he once again struggles against the Satsui no Hado, and eventually becomes the target of a villain's interest, the villain this time being Seth, the new tournament's host and head of the organization S.I.N. (Shadaloo Intimidation Network.) Seth seeks to harness Ryu's Satsui no Hado potential to empower his BLECE weapon although this fails; Ryu comes to terms against Seth and realizes that he desires a power other than what Seth sees in him, and taps into a new power known as the "Power of Nothingness", a great power born of the will to follow one's life without relying on one's fears within, and in the process, defeats Seth and destroys the BLECE machine.

Ryu is still hounded by Akuma however who still seeks to corrupt Ryu. More surprising though is Ryu's reunion with his long thought dead master Gouken, who survived Akuma's "Shun Goku Satsu" attack. Gouken uses the "Power of Nothingness" to seal away the Satsui no Hado within Ryu, although this rouses Akuma into anger, challenging Gouken to a death duel over who gets Ryu. Ryu remains pure in later canon scenes implying that Gouken was victorious.

Street Fighter V sees Ryu undergo mentorship under Gouken to keep in check the Satsui no Hado within him; all throughout the world, turmoil rises again as M.Bison returns to power with a superweapon to conquer Earth, and upon the arrival of the feral and ominous demi-god warrior emissary Necalli, who seeks out the souls of the strong to devour and confronts Ryu as one of his targets.

Street Fighter III still has Ryu travel the world improving his skills, meeting many new fighters along the way including the gigantic German wrestler Hugo, Ken's Brazilian student Sean Matsuda and the wizened old master Oro, who takes Ryu under his wing as his heir to the mythical arts of Senjutsu. Ryu also meets the American wrestler Alex, defeating him in a friendly battle and encouraging him to get stronger. 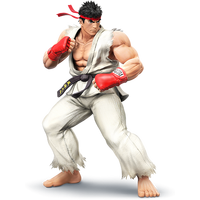 Ryu appears as downloadable content in Super Smash Bros. for Nintendo 3DS and Wii U, being the first newcomer and third-party character with that distinction. He is also the second Capcom character to be introduced to Smash, the other being Mega Man. All of Ryu's attacks originates from his appearances in the Street Fighter series and also emulates the game's controls controls, such as tapping the attack button for weak attacks and holding it down for strong attacks, along with special directional inputs he can use to power up his signature special moves, Hadoken, Tatsumaki Senpukyaku, and Shoryuken. Finally, his down special Focus Attack allows him to negate a single attack and retaliate with a crippling blow, leaving opponents open for counterattacks, or cancel the move into movement options.

Ryu
Ryu visits from the Street Fighter series! Ryu's fighting style is based on karate, but he's mixed in some other martial arts to make his own unique style. In Smash, he will perform either weak or strong attacks depending on if you press or hold down the buttons. His special attacks also have three power levels!

Ryu (Alt.)
Ryu's Focus Attack move lets him withstand a blow and then counterattack.The longer you hold it, the longer your enemies will be stunned if you hit them. If it hits a standing enemy, the enemy will become defenseless. When that happens, cancel your Focus Attack and unleash a sick combo!