Banned
Rumble Falls (大滝のぼり, Ôtaki nobori?) is a stage for Super Smash Bros. Brawl, based on the Donkey Kong franchise, specifically Donkey Kong: Jungle Beat for the GameCube, and was later remade for Wii. It was revealed on Smash Bros. DOJO!! on July 23, 2007.[1]

There are spikes throughout the level which, if hit do damage. The first lone spike has enough knockback to cause a one-hit KO unless teched.

Rumble Falls is banned from tournaments for some of the same reasons that got Icicle Mountain banned: its fast scrolling, and giving advantages to players with good jumps. Also, characters who rely on a tether to recover are hurt, the first spike has one-hit KO potential, and the focus is more on the moving stage than the actual fighting. In fact, most stages from either the Mario universe or one of its sub-universes are banned from at least some tournaments; of the 12 Mario-related stages in Brawl, only Delfino Plaza, Yoshi's Island (SSBB), Jungle Japes, and Rainbow Cruise are not banned at all, despite the latter being a scrolling stage as well.

This stage is based on two stages in Donkey Kong: Jungle Beat. On the bottom half, the stage resembles its namesake from that game, Rumble Falls, the first stage of the Pineapple Kingdom. In each level in Donkey Kong Jungle Beat, Donkey Kong must maneuver through obstacles in order to reach a giant fruit. In Rumble Falls, the giant fruit is a pineapple. Rumble Falls in Donkey Kong Jungle Beat is mostly a vertical stage that involves going through obstacles to go above a waterfall. The overall design of this part of the stage in Brawl is somewhat retained with minor differences; however, the layout of the stage is different. In Brawl, the stage features switches, ladders, and spikes, which weren't present in the original stage.

At the top, it resembles another Donkey Kong: Jungle Beat stage, the Orange Kingdom's Sky Garden. the second level of the Orange Kingdom. In Sky Garden, Donkey Kong's goal is to reach a giant orange. The level features large vines in the background, which hold up large stone blocks. Sky Garden is mostly a horizontal stage that involves going through obstacles to get from one side of the stage to the other. The overall design of this part of the stage in Brawl is somewhat retained, including the giant vines in the background, though adapted into a vertical level. In Brawl, there are spikes, moving platforms, and an airplane, which weren't present in the original stage. 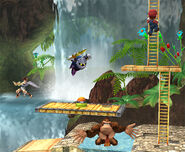 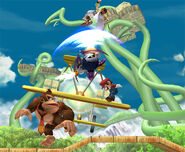