This article is about Roy's appearance in Super Smash Bros. for Nintendo 3DS and Wii U. For other uses, see Roy.

Roy is a downloadable character in Super Smash Bros. for Nintendo 3DS and Wii U. He was shown in a leak showing actual gameplay of him, Lucas and Ryu, and then officially confirmed during Nintendo Direct on June 14th alongside Ryu. He became available for download in June 14th, 2015, alongside Lucas and Ryu.

He currently ranks 42nd on the tier list. Roy has great kill power and a solid combo game but poor recovery and considerable lag on attacks, landing him in the E tier.

Roy is a Dominating and Pressuring character, being capable of fighting up close with fast attacks and very high power.

Roy is a middleweight, similar to Marth, but possesses a higher dashing, falling, and air speed than Marth, giving him greater mobility as well as high survivability at high percentages.

Much like Marth, Roy can easily string attacks together, with many follow ups that are true combos leading to KOs. His Neutral Attack is very fast and deals enough hitstun for a quick dash grab and even a Forward Smash, depending on the opponent and percentage. Neutral and Forward Aerial are also very useful in short-hops, capable of follow ups from the air to the ground.

Roy's KO ability resembles that of Ike's, with all of his Smash Attacks being very powerful, especially his Forward Smash (if sweetspotted). His Flare Blade can one hit KO opponents if fully charged, as well as having high knockback scaling, strong enough to KO opponents at mid-high percentages if used near the edge. In addition, his forward and up tilts and Blazers are effective KO options due to their quick startup, his aerials possess a wide range around him, and the addition of rage further enhances his already high knockback.

Roy's Special Moves reflect a balance between quick speed and high power. Flare Blade, due to its aforementioned power, is a deadly edgeguard ability due to its charging capabilities and its low end lag. Double-Edge Dance is an effective damage racker, with its final upward and forward hits having KO potential. Blazer is a solid out-of-shield option, and can stage spike opponents. Lastly, Roy's Counter is among the strongest in the game due to its 1.3x multiplier, making it extremely effective against powerful attacks.

However, Roy has a very poor recovery, one of the worst in the game, with his Blazer only giving him slightly more vertical reach than Dr. Mario's Super Jump Punch. His Blazer can be aimed horizontally, though, giving him slightly more options during recover. Unlike Marth's, Roy's sourspotted attacks due not give him as many combo potentials, and the high end lag of his attacks greatly hinder his combo potential, which forces him to fight up close to effectively deal damage and makes him vulnerable to projectile campers.

Overall Roy strikes a balance between fighters Marth and Ike, possessing both quick attacks and high KO potential. Players must balance his quick mobility and high damage output to pressure opponents and punish them for mistakes.

Roy has received major buffs and nerfs to balance him in the transition from Melee. His overall speed and power have been balanced to match the rest of the cast, as well as to further differ from Marth/Lucina. Despite being slower than Marth in Melee, Roy is actually faster than both Marth and Lucina here, having a faster dash speed and air speed. Double-Edge Dance received the same treatment of Dancing Blade in Brawl, requiring less technical precision and thus being a more capable move for damage racking. However, Roy's attacks have less range and hitbox durations, necessitating the need to fight up close. The removal of Melee mechanics also hinder his approach significantly.

Roy's appearance is now a combination of his original design in Fire Emblem: The Binding Blade and his design from DLC of Fire Emblem: Awakening. He also has a completely different standing stance and idle pose as opposed to Marth's, as well as a different walking animation.Most of his animations have been tweaked or completely changed to look "heavier", with more aggressive sword swings to reflect his personality, contrasting with Marth's. As a result, this makes his Sword of Seals feel more like a broadsword, as opposed to Marth and Lucina's Falchion, which are longswords.

Roy, the main character of Fire Emblem: The Binding Blade, returns for the first time since Melee! In The Binding Blade, Roy led the troops of Pherae into battle in his ailing father’s stead, and now he brings his speed and talent for short-range combat into this game. His sword, the Sword of Seals, is uniquely powerful at the base of the blade.

His sword, the Sword of Seals, is uniquely powerful at the base of the blade. Flare Blade creates an explosion in front of Roy that can be charged by holding down the button. Take care, though, because at the highest levels of charge, Roy himself will catch fire and take damage! His side special, Double-Edge Dance, changes for each strike after the first depending on whether you hold up or down while attacking.

Critical Hit (Roy)
Add a photo to this gallery 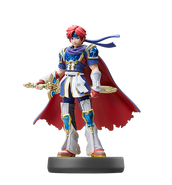 Roy's amiibo figurine
Add a photo to this gallery

Retrieved from "https://supersmashbros.fandom.com/wiki/Roy_(Super_Smash_Bros._for_Nintendo_3DS_and_Wii_U)?oldid=580189"
Community content is available under CC-BY-SA unless otherwise noted.