This article is about Roy's appearance in Super Smash Bros. Melee. For the character in other contexts, see Roy; for information about the character of whom Roy is a clone, see Marth.

Jun Fukuyama
Roy (ロイ, Roy) is a secret character in Super Smash Bros. Melee. Roy is a clone of Marth, with all of their moves having the same animations and most having similar functioning, although they do also have their differences in their fighting styles (primarily in the location of their sweet and sourspots). Like Marth, he is a hidden character, making Roy the only clone of an unlockable character.

Roy is currently ranked 21st on the tier list due to his vulnerability against various combos and chain-grabs (due to his very fast falling speed and long periods of hitstun that he suffers), horrible aerial game, long periods of lag, short-ranged attacks, sub-par combo ability (due to his low hitstun attacks, which is truly problematic at high level play), high difficulty in KOing, and very bad overall matchups against the majority of the cast (although some matchups are considered advantageous or even).

Roy is fought on Temple, with the track Fire Emblem playing. 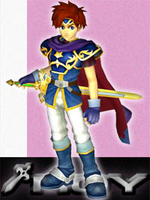 Overall, Roy is a strong, fast character with great reach (including his grab reach). However, he is over-reliant on his Side Smash and sometimes his Neutral Special to score KOs. Roy's fast falling speed makes him difficult to be KO'd off the top, but easy to combo, especially since he suffers long periods of hitstun. Roy has a spike and two Meteor Smashes, but they are all difficult to use effectively. Overall, Roy's ground attacks can easily be spammed in order to juggle opponents and edge-guard effectively, despite very few of them deliver decent knockback. He is often underestimated by many due to being such a close-range fighter as this characteristic causes him to suffer in his aerial game. However, the fact that the knockback delivered by his ground attacks tend to multiply to devastating amounts rather quickly greatly helps him compensate for such a flaw as his ground attacks are indeed very powerful when compared to other characters. In fact, the knockback delivered by his ground attacks are even powerful enough to exceed that of Marth's. Players can often use this feature to their advantage should they ever choose to play Roy, especially in high-level play, which in turn makes him quite a force to be reckoned with. Unlike Marth, it is nearly impossible for Roy to KO opponents at very low percentages.

Roy's Counter is the most powerful in the game, since it multiplies damage and knockback by 1.5. On the downside, it is harder to time than Marth's, and leaves Roy vulnerable if it misses. Roy's Down Tilt is a good combo starter, but Roy still has trouble comboing opponents, due to his attacks having low hitstun. Some of his moves have more knockback when tipped, but the best of his damage infliction requires a sweetspot. Roy can chain grab some characters using his Up and Forward Throws, and he has a fast, long dash-dance. However, he lacks a projectile, and his horizontal recovery is poor in general, due to his fast fall speed.

Roy is overall a considerably less effective character than Marth. All of his sweetspots are placed at the hilt of his blade, making it hard for him to space, and his down aerial's spike is a meteor smash hitbox that is difficult to hit with. Many of his attacks are slightly slower and his KO potential is much worse. Additionally, his wavedash and moonwalk are both shorter than Marth's, resulting in him being less mobile.

However, Roy does have some advantages. His up smash is hits multiple times and can spike, making it more reliable than Marth's, and Flare Blade is much stronger than Shield Breaker, being a one-hit KO when fully charged. Additionally, unlike Dolphin Slash, Blazer has multi-hit properties and can one-hit KO most lightweight fighters, like Mewtwo and Jigglypuff.

As with all low tiers, Roy's gameplay emphasizes his strengths and attempts to make his weaknesses as unnoticeable as possible. This means a heavy reliance on his Double-Edge Dance, grab, Down Tilt and Forward Smash.

Roy's Side B, the Double-Edge Dance, is one of his most used moves, with good reason. It is fast, can combo with itself, variable, and has decent knockback on the third hit, and good knockback on the fourth.

Generally the DED is used out of a dash dance, and is therefore increased in usefulness by Roy's great dash dance.

Good ideas with DED include only using the first hit to knock people out of the air; since it is disjointed, Roy can (relatively easily) stop approachers.

Against CCers or SG's, >B >B VB puts most characters out of range of the shield grab, and knocks crouch cancellers over.

Roy can combo Fast fallers into the third strong hit at higher percents (and others at lower %'s) by using >B ΛB >B. This is useful when having trouble landing a Forward Smash.

>B (>B/ΛB) ΛB will Meteor Smash the opponent. It can be used in attempt to Meteor Smash someone off the level, or to set up for a tech chase. Neither work very often.

If the player is committed to using the 4th hit of the DED, which shouldn't be very often, typically ΛB is the way to go. It has as much knockback as the last >B, and will shield poke if the opponent's head is sticking above his shield just a little.

VB and >B as the fourth hits are useful against CCers who want to take all the damage and if a little extra range is needed-respectively.

The >B, >B, ΛB, VB combo will almost always hit the opponent, first by slamming him down with the ΛB then following up with the VB's multiple hits. The whole combo may deal at least 40% of damage with the option and possibility of finishing off with a Down Smash resulting in more damage.

Note: The first four of these work usually only at 0%-20%

When using Counter, he either says:

In addition to the normal trophy about Roy as a character, there are two trophies about him as a fighter, unlocked by completing the Adventure and All-Star modes respectively with Roy on any difficulty.

Roy
The son of the lord of Pharae Principality, Roy was studying in Ostia when the Kingdom of Bern invaded League of Lycia. His father fell ill at this time, so Roy assumed leadership of Pharae's armies. After his fateful meeting with the Princess Guinevere, his destiny became inextricably linked with the fate of the entire continent.

Roy (Smash Red)
While Roy's moves are well balanced, he's a little on the slow side, and doesn't excel at midair combat. His blade, the Sword of Seals, gives him excellent reach, and makes his Double-Edge Dance slightly different than Marth's Dancing Blade. When it's fully charged, Roy's destructive Flare Blade delivers an instant KO.

Roy (Smash Blue)
Roy's blade is different than Marth's; he does the most damage hitting with the center of his sword. So, a fearless advance into the arms of his foe is Roy's best bet. Blazer is a bit slower than Marth's Dolphin Slash, but it's still a mighty attack that sets anyone it strikes aflame. Roy's attack after using Counter differs slightly from Marth's. 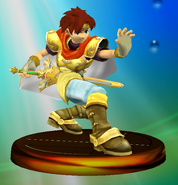