Jun Fukuyama
Roy (ロイ, Roi?) is the main playable hero in the sixth installment of the Fire Emblem series of tactical role-playing games. Roy was included in Super Smash Bros. Melee as a playable character for the purpose of "previewing" the sixth game, which was released in Japan after Melee, making him the only character thus far in the Super Smash Bros. series to be included for that purpose. His appearance in Melee, along with fellow Fire Emblem character Marth, increased global interest in the general franchise, prompting the series to be released internationally from the seventh installment onwards.

While HAL Laboratory obliged to include Marth as a playable character in Super Smash Bros. Melee by popular Japanese demand, the sixth installment of Intelligent Systems' long-running Fire Emblem fantasy tactical-RPG series, Fire Emblem: The Binding Blade (Fuuin no Tsurugi), was nearing the end of its development. Nintendo decided to include that game's main character, Roy, as a playable character in addition to Marth to serve as a preview of the game for Japanese audiences, making Roy the only character in the Super Smash Bros. series to be featured for that purpose. It was a successful ploy to Japanese audiences for both Melee and The Binding Blade, but since this involved a game franchise never distributed outside of Japan beforehand, Nintendo was wary of keeping the unfamiliar fantasy swordsmen in Melee in its North American and European releases, but decided to keep them in based on the approval of western gamers. Roy and Marth, as new and original anime-inspired characters with rather effective fighting abilities, became popular enough in Melee that the Fire Emblem franchise gained international attention from the gaming community.

The Binding Blade, translated as the Sword of Seals, is Roy's weapon. It was wielded by the Legendary Hero Hartmut, the founder of Bern, a military nation in Elibe. It was used to seal away the Dark Dragon and end the Scouring, a war in which humans fought and exiled dragons to another dimension. Roy would later take the Binding Blade as his main weapon following his promotion to Master Lord, and would use the blade to seal away the power of Dark Priestess/Dragon Idunn.

Roy uses the Binding Blade in all his attacks except his pummel and throws. It is referred to its Japanese-translated name in Melee and Super Smash Bros. for Nintendo 3DS and Wii U, and is referred to as its localized name in Ultimate. 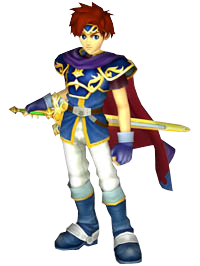 Roy makes his Smash-series debut (and by extent, his altogether game and North American debut as well) as an unlockable character in Melee. He can be battled to be unlocked one of two ways: beating either Classic or Adventure as Marth on any difficulty without Continuing, or playing 900 Vs. mode matches, clearly the first method is incomparably easier than the second.

Roy
The son of the lord of Pharae Principality, Roy was studying in Ostia when the Kingdom of Bern invaded League of Lycia. His father fell ill at this time, so Roy assumed leadership of Pharae's armies. After his fateful meeting with the Princess Guinevere, his destiny became inextricably linked with the fate of the entire continent.

Roy [Smash]
While Roy's moves are well balanced, he's a little on the slow side, and doesn't excel at midair combat. His blade, the Sword of Seals, gives him excellent reach, and makes his Double-Edge Dance slightly different than Marth's Dancing Blade. When it's fully charged, Roy's destructive Flare Blade delivers an instant KO.

Roy [Smash]
Roy's blade is different than Marth's; he does the most damage hitting with the center of his sword. So, a fearless advance into the arms of his foe is Roy's best bet. Blazer is a bit slower than Marth's Dolphin Slash, but it's still a mighty attack that sets anyone it strikes aflame. Roy's attack after using Counter differs slightly from Marth's. 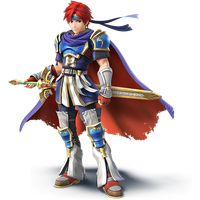 While Roy did not return as a playable character in the initial version of Super Smash Bros. for Nintendo 3DS and Wii U, he returns as a downloadable fighter on June 14th, 2015. In this game, his design was changed to match his appearance as a Master Lord in Fire Emblem: The Binding Blade, while adding elements from his artwork as an Einherjar from Fire Emblem Awakening. His moveset underwent drastic changes in his transition from Melee, having been buffed and partially reworked as a semi-clone of Marth. Finally, Roy has been given a Final Smash: Critical Hit, which operates differently from Marth and Lucina's version of the attack and involves him swinging his sword overhead to trap opponents before slashing them.

Roy
Roy, the main character of Fire Emblem: The Binding Blade, returns for the first time since Melee! In The Binding Blade, Roy led the troops of Pherae into battle in his ailing father’s stead, and now he brings his speed and talent for short-range combat into this game. His sword, the Sword of Seals, is uniquely powerful at the base of the blade.

Roy (Alt.)
Flare Blade creates an explosion in front of Roy that can be charged by holding down the button. Take care, though, because at the highest levels of charge, Roy himself will catch fire and take damage! His side special, Double-Edge Dance, changes for each strike after the first depending on whether you hold up or down while attacking. 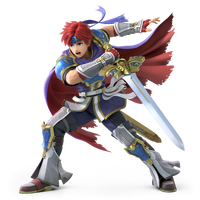 Roy makes his return in Super Smash Bros. Ultimate as an unlockable character. For the first time in the series, Roy is fully voiced in English by Ray Chase, his voice actor since Fire Emblem Heroes. Roy also serves as the original fighter of Chrom, who retains his move-set albeit while having a consistent damage output across the entirety of his attacks.