This article is about Rosalina & Luma's appearance in Super Smash Bros. for Nintendo 3DS and Wii U. For other uses, see Rosalina.

Rosalina is a newcomer in Super Smash Bros. for Nintendo 3DS and Wii U. She was revealed on December 18, 2013. She fights on her own as well as with the help of her Luma.

Rosalina is the third tallest character, just behind Bowser and most arguably Ganondorf. She is also considered to be Lightweight and Floaty, which makes her an easy character to knock off the stage. She's notable in that all attacks where she creates mini-galaxies, such as her Forward and Down Smashes, have transcendent priority, much like Lucas' Up Smash in Brawl. This means those attacks cannot collide with, clash with, cancel out, or be cancelled out by other hitboxes. Rosalina can perform an Advanced Technique called "Lunar Landing" that allows the player to cancel the landing lag into Luma attacks.

The very special treat that makes her so unique is that she can attack from two different locations at all times, assuming Luma is alive and "sparkling". This makes for some true combos and really good zoning game. The downside is that Luma can be "stunned" with a strong enough attack, making her unable to follow any commands from Rosalina for a while. Furthermore, if she gets stunned near the edge, she has the risk of falling down and get KO'd. This makes it very risky to play against hard engage or high pressure characters such as Little Mac, Marth, Lucina or Greninja.

The mechanic between her and Luma is somewhat similar to the Ice Climbers; Luma attacks whenever Rosalina does, and can attack opponents even if Rosalina is stunned or being grabbed. Surprisingly enough, Rosalina is the one putting the damage on her foes, while Luma mostly just provides knockback, with her most damaging ability being her Up Tilt at 8%. This means that Rosalina can fight on her own even if Luma gets KO'd, but it also means she loses KO power without her.

When playing with Rosalina is alone (meaning that Luma has KO'ed), the player must rely on Rosalina's poor KO capacity, but she possesses powerful spacing tools, such as Jab, Down Smash, Down Tilt and Back Aerial, that helps to keep enemies at bay before Luma respawns.

When together, the player can make use of Rosalina combo potential with Luma's high damage and knockback capacities to pressure opponents. Using Back Aerial in fast-hops with fast-falls is a powerful gimping tool. Luma Shot can also cause massive damage to opponents, against specially rushing characters like Little Mac, Fox and Greninja.

Her high learning curve comes with the fact that her micromanagement forces the player to be always aware of Rosalina's position, Luma's position, Luma's position compared to Rosalina, and the enemy's position. A prudent Rosalina player will be able to tell when she needs Luma beside her and when she can launch Luma to put pressure and zone the enemy. The player must also be able to use Luma to Rosalina's advantage when she's grabbed; Luma can easily interrupt grabs and throws and frustrate opponents that rely on throws to do follow ups. Mastering these steps grants Rosalina incredible versatility and flexibility, allowing the player to pull a variety of mindgames on his enemy.

It should be noted that Luma can't do anything when Rosalina grabs an opponent.

The mysterious Rosalina lives in the Comet Observatory with the Lumas. In Smash Bros., Rosalina and Luma can fights in different places at the same time. If you can trap someone between Rosalina and Luma, you'll be able to unleash incredible damage with their joined attacks!

Rosalina can pull in items and projectiles around her with her Gravitational Pull move. Her up special Launch Star is a diagonal jump and, though harmless, it has exceptional range. You also have some control over Rosalina's trajectory when she uses it. 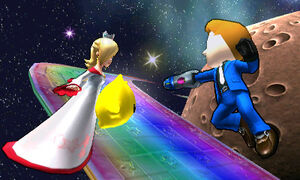 Rosalina and Luma on the Mario Galaxy stage.

Rosalina and Peach on the Mario Galaxy stage.

An image of Rosalina, Mega Man, and Toon Link.

An image of Peach and Rosalina floating through the air.

An image of Rosalina using an unknown attack.

Rosalina and Luma during their reveal

Rosalina during her reveal

Rosalina and Luma with Zelda

Rosalina fighting Zelda with Viridi in the background

Rosalina turning around (oddly not on her feet and seemingly floating).

Retrieved from "https://supersmashbros.fandom.com/wiki/Rosalina_%26_Luma_(Super_Smash_Bros._for_Nintendo_3DS_and_Wii_U)?oldid=494838"
Community content is available under CC-BY-SA unless otherwise noted.