When unlocked, they are fought at Mario Galaxy.

Upon Ultimate's release, players immediately noticed nerfs to Luma's attacks and survivability that severely hampered Rosalina's ability to stop approaches, ledge trap, and zone her opponents as effectively as in the duo's previous iteration. Additionally, swordfighters were prevalent in the early metagame, which made Luma very vulnerable to being outranged. Despite Meta Knight and Cloud, her worst matchups in SSB4, being significantly nerfed, some professionals claimed that Rosalina & Luma's nerfs were too harsh for the character to even be mid tier, and as a result they had little representation in the early metagame, especially since their best player, Dabuz, dropped the character.

However, Rosalina & Luma would receive significant buffs in 2.0.0 and 3.1.0 that negated some of their severe nerfs, especially to their range, power and frame data. As a result, Dabuz once again picked up Rosalina & Luma—albeit only as a co-main—while other players, such as Kirihara and Homika, started to gain better results. Although Rosalina & Luma are still agreed to be one of the most nerfed characters during the transition from SSB4 to Ultimate, their perception has significantly improved since the game's initial release, with most professionals now considering her to be a mid-tier or high tier with Dabuz putting her in top tier.

Classic Mode: One Star after Another

The opponents are characters from outer space or other planets, with the exception of Bowser, who is fought in reference to his boss battles in Super Mario Galaxy and Super Mario Galaxy 2. The boss of this route, Marx, fits in with the theme due to his final battle in Kirby Super Star taking place in space. In addition, Assist Trophies summon Starfy exclusively.

Rosalina & Luma were among the fighters that were summoned to fight the army of Master Hands.

During the opening cutscene, Rosalina & Luma were present on the cliffside when Galeem unleashed his beams of light. They attempted to fly away alongside Diddy Kong, but both of them were hit by a light beam, vaporized, and placed under Galeem's imprisonment along with the other fighters, excluding Kirby.

Rosalina & Luma were among the many fighters that fell under Dharkon's control after Galeem was first defeated. They are found in The Dark Realm near the entrance of the Mysterious Dimension sub-area, where the spirit of MegaMan.EXE must be confronted before approaching them.

Rosalina along with Fox and Falco in the Reset Bomb Forest stage. 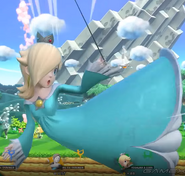 Rosalina with Kirby, Joker and Bayonetta in the Mementos stage.

Rosalina after throwing an opponent on the Super Mario 3D Land Stage.