Official artwork of Rosalina from Mario Party: The Top 100.

Rosalina debuted in Super Mario Galaxy, where she is a major non-playable character. She commandeers the Comet Observatory, which visits her home planet once every 100 years, and functions as the home of both her and the Lumas. Her backstory is also explained in a storybook that she reads to the Lumas at various points during the game. The storybook reveals that Rosalina first journeyed into outer space to help a lost Luma find his mother, which eventually led to them building the Comet Observatory, Rosalina finding out about the death of her own mother, and her forming a new family relationship with the Lumas as their adoptive mother.

Rosalina also appeared in Super Mario Galaxy 2, but has a vastly reduced role, as she only appears during the end of the game's story to reunite with Luma after he assisted Mario in defeating Bowser. However, Rosalina will also appear on Starship Mario after the player collects all 242 Power Stars. 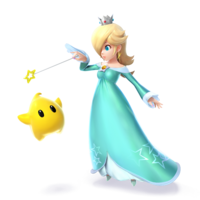 Rosalina is a playable newcomer in Super Smash Bros. for Nintendo 3DS and Wii U, being confirmed during a Nintendo Direct on December 18, 2013. In addition to her own moveset, she is allied with a Luma, who has its own moveset and can assist her with almost all of her attacks. Luma can be controlled along with Rosalina, which results in the pair being a "two-in-one" fighter like the Ice Climbers.

The mysterious Rosalina lives in the Comet Observatory with the Lumas. In Smash Bros., Rosalina and Luma can fight in different places at the same time. If you can trap someone between Rosalina and Luma, you'll be able to unleash incredible damage with their joined attacks!

Rosalina & Luma (Alt.)
Rosalina can pull in items and projectiles around her with her Gravitational Pull move. Her up special Launch Star is a diagonal jump and, though harmless, it has exceptional range. You also have some control over Rosalina's trajectory when she uses it. 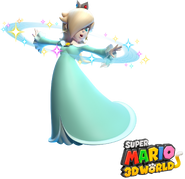 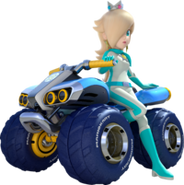 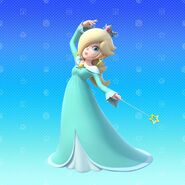 Rosalina's official artwork in Mario Party 10.
Add a photo to this gallery

Retrieved from "https://supersmashbros.fandom.com/wiki/Rosalina?oldid=599030"
Community content is available under CC-BY-SA unless otherwise noted.