The Rope Snake is Lucas' Grab attack. He can also use it as a Tether Recovery, similarly to Samus's and Link's grabs (Grapple Beam and Clawshot, respectively), although it has a much shorter reach than these tether recoveries. It also makes an appearance as Lucas' Side Taunt; he converses with the rope snake after it taps him on the shoulder.

In Super Smash Bros. for Nintendo 3DS and Wii U, the Rope Snake returns both as a taunt and a grab. Its reach has been significantly increased, especially when using it as a Tether Recovery.

Lucas can use his Rope Snake on air to hit oponents. The attack causes 2 - 4% damage and has little knockback. This attack is especially used for neutral game and spacing.

Lucas utilizes the Rope Snake as his grab and Tether Recovery. 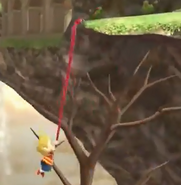 Rope Snake in the Earthbound Wiki

Retrieved from "https://supersmashbros.fandom.com/wiki/Rope_Snake?oldid=558427"
Community content is available under CC-BY-SA unless otherwise noted.