Charging raises the speed, damage and knockback of the attack, dealing 18% damage when fully charged, indicated by a higher-pitch sound. It deals high horizontal knockback that KOs at relatively low percentages. Hitting an opponent causes Jigglypuff to rebound for a short distance. The knockback is usually a low diagonal, but if Rollout is used in the air, the opponent is sent straight upwards.

In Brawl, Jigglypuff can charge further into a super charge (in which the controller will "rumble" if applicable). This will not cause any more damage or knockback, but Jigglypuff will roll further and will be less affected by gravity when it travels through the air. Also, in Brawl, if Jigglypuff collides with a wall, but the control stick is still tilted towards the wall, Jigglypuff will strike the wall again, then rapidly spin against it, emitting blue shock waves and a drilling noise, and causing pure vertical knockback to anyone who is hit. In Melee, Jigglypuff would continuously rebound off the wall, until the move ended.

Jigglypuff can change direction back and forth during the Rollout. In Melee's Adventure Mode, it is one of the fastest ways to move around.

If used in the air or off of a ledge, Jigglypuff takes a long time to end the move, so be careful when using it. In Melee, this move puts Jigglypuff in a helpless state if the attack ends while Jigglypuff is in the air. This does not happen in Brawl. Additionally, in Brawl, the move can "curve" in midair to prevent going off the side of the stage. This can even go to a degree where Jigglypuff is falling straight down, spinning, and when it lands, it will move in the opposite direction. However, if an opponent is hit in midair and there is a gap, Jigglypuff will hit the opponent and float down through the gap, resulting in a self-destruct.

Rollout is also a useful move due to its high priority, meaning that it will cancel out most other non-projectile attacks. An interesting exception is that it will actually reflect Snake's Remote Missile. Also, when Kirby copies the move, he attacks in a manner similar to Wheel Kirby from various games. 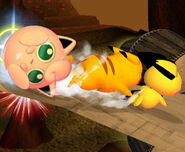 Rollout when used as a recovery move in Brawl.

Jigglypuff using Raging Rollout.
Add a photo to this gallery

Rollout is a Rock-type move in the Pokémon games. Learned mostly by spherical Pokémon, it must be used for five turns in a row (unless it misses or otherwise fails), the base power doubling after every hit.[1] If Defense Curl is used beforehand, Rollout becomes even stronger. However, not all Pokémon that learn Rollout can learn Defense Curl.

In Generations II and III, Jigglypuff learns Rollout at level 19. It was moved up two levels in Generation IV.

Retrieved from "https://supersmashbros.fandom.com/wiki/Rollout?oldid=471692"
Community content is available under CC-BY-SA unless otherwise noted.