Official artwork of Rodin from Bayonetta 2.

The Gates of Hell

Tesshō Genda
Rodin (ロダン, Rodan) is a character from the Bayonetta universe.

Rodin is a Trophy that is obtained when the Bayonetta DLC is purchased.

This shady figure owns the Gates of Hell bar and runs a side business in mysterious objects and powerful weaponry made from the souls of demons. He's known for being a talented gunsmith and counts Bayonetta as a loyal customer, but it's said that if any human uses his wares, they'll suffer a terrible fate... 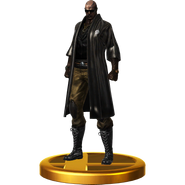 Rodin trophy in Super Smash Bros. for Wii U.

He appears as an Assist Trophy in Super Smash Bros. Ultimate and is one of the spirits encountered in the World of Light.

He attacks players in a similar fashion to Bayonetta, he also uses an attack similar to Bayonetta's After-Burner Kick and at random intervals, he will give an item to the player as he leaves.