The Rocketbarrel Boost is Diddy Kong's Up B move. The distance the Rocketbarrel Boost will cover depends on how much the player charges the jet pack. The player can change the direction that Diddy travels with the jetpack by tilting the control stick while the move is being charged. When used in the air with the foe right under the barrels it may serve as a meteor smash, spiking the foe while you recover to safe ground. If Diddy is attacked while using the Rocketbarrel Boost, the barrels will fly off and become a projectile. Not only will the barrel fly around, but it will also seek out any fighter within a large range. If Diddy hits a ceiling, he takes about 9%. 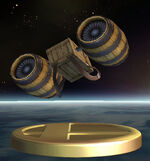 Kong straps them on his back. It's a convenient gadget to have when adventuring, but for whatever reason, Diddy also uses it when playing tennis and basketball. The moves he can pull off with the rocketbarrel pack are so cool that they're almost not fair. Almost.

Retrieved from "https://supersmashbros.fandom.com/wiki/Rocketbarrel_Boost?oldid=228073"
Community content is available under CC-BY-SA unless otherwise noted.