Charizard takes a large rock and headbutts it, with the force of the headbutt having high knockback and very high damage. After this portion of the attack, the rock shatters into three smaller pieces that fly forward in a spread effect, dealing small amounts of damage. The attack is a powerful, but slow, finisher in normal matches.

It is a useful move against bosses, as they do not make any effort to dodge the slow attack, and because they don't experience knockback, they can receive the maximum possible damage from the move as they can be hit by the headbutt and all the pieces of the rock. In addition, since bosses are unaffected by knockback, this means every possible hitbox will connect, dealing massive damage, whereas playable characters will often be knocked out of range by the initial blow. Similarly, this means it is one of the few moves that can break a Smash Ball alone.

Rock Smash is great on shields and as an escape tool; use it while an enemy is using a combo on Charizard and the Super Armor on the move will prevent Charizard from being launched, end their combo, and possibly attack them with a high-damaging move.

This move does not appear in Super Smash Bros. Ultimate, as due to Charizard being on the returning Pokémon Trainer’s team again, Pokémon Change would replace Rock Smash as its down special move. 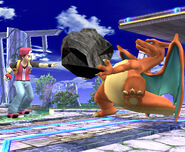 In SSB4 the move can be customized to Sinking Skull or Rock Hurl.

Sinking Skull will slam opponents into the ground temporarily while doing decent damage.

Rock Hurl has Charizard grab a rock and smash it against its head. It will send pieces diagonally up that will damage any opponent and carry an opponent if they were hit by the initial blast.

Rock Smash is a TM in Pokémon video games, being introduced in Generation II as the TM08. It had a Base Power setting of 20, having 15 Power Points, 100% accuracy and is a Fighting-type attack. In addition, outside of battle, it is used to destroy small rocks found on the road, or in caves.

In the third and fourth Generations, it was the HM06 and was even boosted to 40 Base Power in the latter Generation, but in the fifth generation, it was returned to TM status as TM94, and regained its status as a HM during the Omega Ruby and Alpha Sapphire games. Perhaps ironically, in the main Pokémon series, Rock Smash is considered a weak move.