Smashpedia
Register
Don't have an account?
Sign In
Advertisement
in: Attacks, Special Attacks, Up Special Moves,
and 4 more

Robo Burner is R.O.B.'s Up Special Move. The move is a very effective recovery move. Although it deals no damage, it can be used, then deactivated for an attack, then reactivated, making it extremely useful for edge guarding. Robo Burner relies on fuel, which automatically charges when R.O.B. is touching the ground, taking about 1.5 seconds to fully charge.

Robo Burner can propel R.O.B. great distances, both vertically and horizontally, making it, arguably, one of the best recovery moves in the game. However, since it is unable to charge when in the air, aggressive edge guarding on the opponent's part can prevent R.O.B. from safely returning, by simply forcing R.O.B. away from safety until his fuel runs out. An effective way to overcome this strategy is by floating considerably beneath the platform, making edge guarding either difficult or suicidal, then jetting upwards and grabbing onto the ledge.

Its effect can be maximized by rapidly pressing the special move button or up instead of holding it; using this method will almost double the distance gained, due to the maintained inertia of the move. This makes it arguably the longest recovery move in the game, not counting Gliding or Peach's two floating abilities. This move is also functionally similar to Wings of Icarus.

As a side note, some R.O.B. Blaster enemies in the Subspace Emissary have the ability to use Robo Burner for an unlimited amount of time, allowing them to chase fighters down and constantly fire Robo Beams at them.

Robo Rocket is one of R.O.B.'s Up Special Moves that can be used via customizations. R.O.B. propels himself quickly and goes very high, the move can be used as a Meteor Smash. R.O.B. is not able to control the move, and when the move ends, he cannot use aerials.

High-Speed Burner is one of R.O.B.'s Up Special Moves that can be used via customizations. R.O.B. propels himself faster, but the fuel burns quickly. 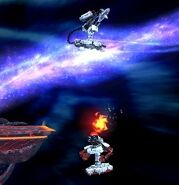