Robin (Super Smash Bros. for Nintendo 3DS and Wii U)

This article is about Robin's appearance in Super Smash Bros. for Nintendo 3DS and Wii U. For other uses, see Robin.

♂: Yoshimasa Hosoya
♀: Miyuki Sawashiro
Robin (ルフレ, Rufure, Reflet in Japan) is a newcomer to Super Smash Bros. 3DS/WiiU directly from the Fire Emblem series, specifically Fire Emblem: Awakening. He was confirmed during a live stream, alongside Captain Falcon and Lucina, on the official Super Smash Bros. website on July 14th, 2014.

Robin is one of the six characters that have an alternate costume which changes his gender, acting similarly to his home game.

Robin currently ranks 37th on the tier list, which is mostly due to him having a wide range of powerful magical attacks, including one that heals him, powerful smash attacks and aerials with the Levin Sword, and a variety of unusual projectiles. However, he can only use these attacks a certain number of times before losing them temporarily, including his recovery, and his smash attacks will be considerably weaker and difficult to transition to once he loses the Levin Sword. He also possesses one of the slowest walking and the slowest running speed in the game, hurting his approach, and has a very short grab range despite having a good grab game.

Robin is a Zoning and Trapping type of fighter, specializing in both projectile usage to control the battlefield and close-ranged attacks to heavily punish opponents.

Robin is a middleweight, but suffers from extremely slow mobility due to rather slow movement and the slowest dash in the game. While it does hinder his offensive options, it does make it easier for him to play a more defensive role in the fight.

Robin is unique as he breaks the mold for Fire Emblem fighters; he possesses both tomes and swords, making him capable of keeping opponents at a distance and punishing advances with his disjointed range. His neutral combo can vary between a multi-hit wind attack and a single fiery explosion, giving Robin good options for trapping opponents and knocking them back. Robin's smash attacks and directional aerials are extremely powerful due to the Levin Sword due to its range and sheer power. While the Bronze Sword does not possess the same KO potential as the Levin Sword, it does create many combo options due to its weaker knockback, making it extremely useful for his neutral aerials and tilts.

Robin's Special Moves have high utility when pressuring and spacing. Thunder is a multipurpose move that is useful for racking up damage, disrupting approaches, or knocking back opponents depending on its charge. Arcfire is a useful move for edgeguarding, as it racks up decent damage and can chain into other attacks. Elwind doubles as a recovery move and one for relieving pressure from opponents from below. Finally, Nosferatu is an effective self-healer due to its function like a grab, making it impossible to shield.

However, Robin is mainly offset by the durability of the Levin Sword and his tomes. Though the discarded sword and tome can be used as a throwable item to inflict high shieldstun and damage, this leaves Robin with limited options when fighting; exhausting the Levin Sword will force Robin to lose his high KO potential and range, while losing any of his tomes will make Robin lose options for racking up damage, disrupting approaches, and pressuring. His recovery is extremely affected by this mechanic, as losing Elwind will give Robin no method of recovery. Conbining this weakness and his slow mobility makes Robin extremely susceptible to fighters capable of fighting up close, especially those with better disjointed ranges. Finally, Robin's grab game is extremely lackluster due to its short range and high ending lag.

Overall, players must be tactical with Robin's tomes and melee attacks, being precise with every attack and capitalizing on opponents' mistakes. They also must be aware of the durability of Robin's options, and be prepared to play defensively once they have been exhausted.

All of Robin's Smash attacks activate the Levin Sword. If it is gone, they will use the bronze sword in its place. The damage variations (X% ~ Y%) refer to the difference between these swords, X being bronze, and Y, Levin.

Robin can perform versions of their Smash attacks midair by tapping the control pad / stick and hitting the attack button simultaneously, or if the last basic attack prior to the aerial was a Smash or an Aerial Smash. Levin Sword attacks while airborne let out sparks which somewhat extend the duration of each attack. That means airborne attacks that missed their sweet spot can still have a chance of hitting, but for only 5% damage.

Robin's special moves involve using spells from his/her tomes. However, the tomes can only be used a certain number of times.

Robin's magic is powerful, but it has limited uses before needing to recharge. Thunder can be charged in stages, will become Thoron at max charge, and gains damage and speed with its charge. Arcfire creates a flame pillar, perfect for dealing with an edge-clinging foe.

Like the Pair Up feature in Fire Emblem: Awakening that lets two characters attack a foe at once, Robin's Final Smash calls Chrom, the Prince of Ylisse, to the battlefield. First, Chrom dashes forward and if he lands a hit, Robin joins him for a flawless combination of attacks. It can even catch multiple opponents at once! 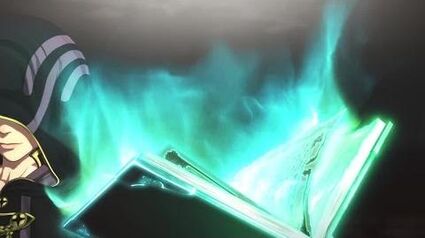 Illustration made by Awakening's main artist. 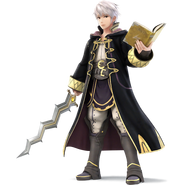 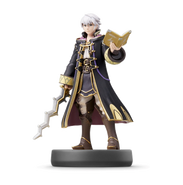 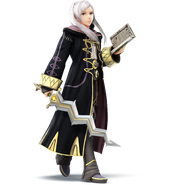 Robin can grab the Levin Sword and throw it as an item after its uses expire.