This is an old revision of this page, as edited by Are You Serious (Message Wall | contribs) at 04:58, 17 August 2018. It may differ significantly from the current revision.

♂: Yoshimasa Hosoya
♀: Miyuki Sawashiro
Robin (ルフレ, Rufure?) is the default name for the avatar character in Fire Emblem: Awakening. He makes an appearance in Super Smash Bros. for Nintendo 3DS and Wii U as a playable character. 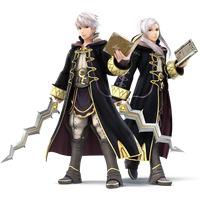