Yuki Kaida
Riki (リキ) is one of the seven playable characters in Xenoblade Chronicles and a member of the mercantile Nopon race.

Riki appears alongside Dunban as part of Shulk's Final Smash, Chain Attack. He also appears as an Assist Trophy and uses the following arts:

Riki also appears a trophy which is obtainable in both versions of the game.

A Nopon from Frontier Village in Xenoblade Chronicles. Despite appearances, this year's legendary Heropon is actually a middle-aged father of 11. If you summon him in this game, he'll use Arts to knock over your foes, freeze them, and even send them to sleep. Riki can also heal you, but if he does, he'll heal everyone else too!

As an assist trophy

Riki also returns as part of Chain Attack, this time with Fiora joining in.

Riki appears as a Master Spirit whose Dojo can be found in the Light Realm at World at Light.

His spirit battle is a team battle against Roy Koopa and Shulk at Gaur Plain’s Omega Form. The Roy puppe fighter references both Roy and Riki having a round-shaped body with Roy’s sunglasses resembling Riki’s eyes. Riki himself appears as the Assist Trophy enemy. The Shulk puppet fighter references Riki being a member of Shulk’s party in Xenoblade Chronicles. The minion fighter’s yellow costume is based on Riki’s color scheme. The stage and music (Gaur Plain) represent Riki’s appearance in Xenoblade Chronicles. Also, the Earthquake & Flowery rules and the Special-Move Power ↑ battle condition reference Riki’s arts in the game, each respectively referencing Roly Poly, Bitey Bitey, and Happy Happy.

Once his spirit is defeated, a dojo opens that increases special-move power.

Riki, alongside with Shulk, in the Wii U version.

Riki, alongside with Shulk, in the 3DS version.

Riki’s trophy in for 3DS. 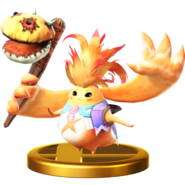 Riki’s trophy in for Wii U. 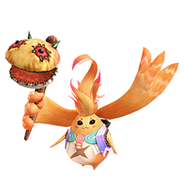 Riki as he appears in Ultimate.