This article is about Ridley's appearance in Super Smash Bros. Ultimate. For other uses, see Ridley.

Ridley is a newcomer fighter from the Metroid universe who makes his first playable appearance in Super Smash Bros. Ultimate. To date, he is the largest Smash Bros. fighter in Smash Bros. history to be an eligible fighter, although his size was reduced compared to his original appearance to fit with other fighters.

When unlocked, he is fought at Norfair.

Being a widely requested character, there was a lot of hype when Ridley was first announced to be playable. However, initial opinions of Ridley’s viability in the E3 Demo Build were very negative. Due to him having the largest hurtbox in the game while also not as being as heavy as other super heavyweights, along with his attacks suffering from high startup and endlag, many people claimed that Ridley’s disadvantage state was too risky for him to make a significant impact towards the meta. As such, he was initially considered to be a low or even bottom tier character.

However, when the game was released, Ridley achieved notable successes despite having low representation, thanks to impressive results from players such as Nair^, OverLade, adom, and Vreyvus, Nair^ in particular placed 2nd at Mexican Gaming Championship with a notable win over Dark Wizzy, as well as 5th at Smash Fest to the Sky. This has led to most professionals to re-evaluate their opinions on Ridley, stating that he’s a “high risk, high reward”, which is indicated by Ridley’s excellent advantage state, where he can utilise his range, speed and power to provide him a strong and versatile neutral game, though mistakes can lead him to his poor disadvantage state, which shows his relatively high learning curve. Overall, Ridley's reception is significantly better than initially thought, as he is no longer considered to be a low tier, proving that he can be very potent once mastered.

Ridley fights characters who pilot their own spaceships.

Although Ridley does not appear in the World of Light opening cutscene, he was vaporized and later imprisoned alongside the rest of the fighters (sans Kirby) when Galeem unleashed his beams of light.

Ridley was one of the many fighters that fell under Dharkon's control upon Galeem's first defeat. He is in the Dracula's Castle sub-area, appearing on the map in the subterranean section, once the player defeats The Creature & Flea Man spirit. 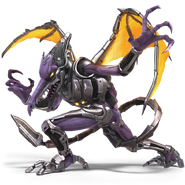 Ridley with Kirby on Mushroom Kingdom U.