Rest (ねむる, Nemuru?, lit. "to Sleep"; referred to as Sleep on the original Super Smash Bros. website) is Jigglypuff's Down Special Move in all three games. Jigglypuff turns toward the camera and falls asleep for several seconds. Before Jigglypuff falls asleep, any opponent in contact with it is instantly hit. This attack is infamous for its high knockback, no startup lag, very small range, and long vulnerability period. Jigglypuff gains invincibility frames for approximately the time it takes to close its eyes.

The move varies from game to game, with Melee's Rest having several times more knockback and 8% more damage at the expense of some range. In Super Smash Bros. Brawl, Jigglypuff's Rest deals less initial damage and knockback, only gives vertical knockback, and produces a flower in place of its fiery Melee effect - essentially nerfing the move. In Super Smash Bros., Rest is very similar to Melee's Rest, having extremely high killing power.

The attack can be combo'd into by many of Jigglypuff's moves, including Up Throw, Pound, and Up Tilt. In Super Smash Bros., Jigglypuff's d-air can combo into this move. The hitbox emerges in one frame, making it tied for the fastest move in the series with the Reflector move.

In Super Smash Bros. for Nintendo 3DS and Wii U, the move can turn into Leaping Rest and Wakie Wakie via Customizations, Leaping Rest consists in Jigglypuff shooting upward and fall asleep as it falls down. If any enemy is in the way as it shoots upwards, they will receive damage and are knocked back. While Wakie Wakie consists in Jigglypuff creating a small vortex around it when it is sleeping, which repels enemies. After a second, Jigglypuff lets loose an explosion which delivers decent damage and knockback to any opponent that hits. 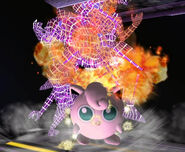 Rest used on Pit and Ganondorf in Brawl.

When used in Brawl, Rest leaves Flowers on the opponents' heads.

Jigglypuff using Wakie Wakie.
Add a photo to this gallery

In the original games, Rest does not harm the opponent at all. It is a Psychic-type move with 10 PP that makes the user fall asleep for two turns, in order to recover all lost HP and remove any status problem. It has been TM44 ever since Red and Blue

Retrieved from "https://supersmashbros.fandom.com/wiki/Rest?oldid=471695"
Community content is available under CC-BY-SA unless otherwise noted.