N/A
Registeel (レジスチル Registeel) is a Steel type Pokémon from the Pokémon universe.

Registeel appears as a stage hazard in the Kalos Pokémon League stage.

This Steel-type Pokémon's hollow body is made out of an ultrahard metal, forged under pressure over thousands of years underground. It can appear in the Kalos Pokémon League stage, in the Elite Four's Steel-type chamber. Its Stomp attack will launch fighters on the ground and even the giant swords mounted on the stage! 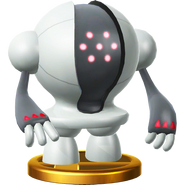