Smashpedia
Register
Don't have an account?
Sign In
Advertisement
in: Assist Trophies, Others universe, Mii Costumes,
and 7 more

The Ray Mk III is the latest model in the Ray Series, a line of starter Shining Fighter robos developed by Lambda Ltd. in the Custom Robo series. It is generally the first robo a player starts with when starting the game and is made for beginners, due to it being designed to be a jack of all trades and a master of none. The first Ray was for the Hero to use in the first Custom Robo for the Nintendo 64. It was later succeeded by the Ray Mk II in Custom Robo V2, a Jumper Style robo with an illegally enhanced copy used by the Doppelgangers called Ray II Dark. A new upgraded Normal Style model called the X-Ray is introduced in Custom Robo GX, which gets modified into the Ray Sky after being stolen by the Nikaido Group; a military grade variation called AIRS (Anti-Insurgent Ray Sky) also appears in the game. A new variation called Ray 01 is introduced in Custom Robo Battle Revolution, as well as a rare illegally enhanced copy called Ray Warrior and an obselete and imbalanced model called Ray Legend that was commanded by the Hero's father.

Ray Mk III appears in Custom Robo Arena, once again used by the Hero; it is acquired at the start of the game after the player's father replaces the Ray Mk II with it. Unlike other Ray models, it was developed by a new manufacturing company called NeoBrain, who acquired the rights to the Ray Series from Lambda Ltd. In the series, the player must collect different Custom Robos and battle parts through the course of the story in arena battles to defeat opponents in matches, eventually making their way up to face champion users. Like with other robos, the Ray Mk III is equipped with a gun, a bomb, a pod, and legs - all of which get continuously upgraded as the player progresses through the story. It also has the unique ability to air-dash twice. Though it is a starter robo, it has generally average stats making it very difficult to win matches with; thus, it is recommended to be used for its long-range attacks.

Although Ray Mk III does not appear in Melee (due to not being created yet), its predecessor, Ray Mk II, makes a cameo as a collectible Trophy.

The Custom Robo games feature combat between small robots averaging about 12 inches in height. Ray Mk II is the upgraded descendant of one of the combatants from the original game. It's a well-balanced Jumper model in the Shining Fighter line of robots. Its stable design lets it excel with a minimum of customization.

Ray Mk III appears as a summonable Assist Trophy. It will jump high up with its Formula Legs and hover above the stage with its Twin Flank Pod G, firing a barrage of lasers from the Flare Gun and dropping a series of bombs from the Straight Bomb T. It is also capable of air-dashing twice after shooting at opponents. It will leap and hover two more times before disappearing.

Ray Mk III must be unlocked in order to have a chance of him showing up in a match. To unlock it, players must compete in 100 matches to completion.

The Ray Mk III trophy can be obtained after clearing Level 3 of Target Smash in under 20 seconds.

The custom robo used by the main character. It's the latest Shining Fighter model in the Ray line of robots, which appears throughout the Custom Robo series. The main character switches from his beloved Ray Mk II to this model after his sister and father develop it. This one has a great balance between built-in abilities and ease and depth of available customization.

Another one of Ray Mk III's predecessors, AIRS, also appears as a Trophy in Brawl.

Highly illegal modified robos. The Jameson is based on the Lightning Sky. It and the A.I.R.S., a high-end Ray machine, can transform into fighter jets. The A.I.R.S. was developed for military use and thus cannot be used by all commanders. Both of these robos were available via DS Download Stations in Japan.

Ray Mk III and its predecessors are available as Stickers.

A costume for the Mii Gunner modeled after Ray Mk III is available in the base game. It must be acquired separately in the Shop; the helmet is available for 450G, while the outfit is 650G.

The gun it uses is the Flare Gun. It is an equippable firearm with medium range that can shoot up to 3 rounds that explode on impact (with the explosion harnessing most of the damage). In Custom Robo Battle Revolution it can be acquired after beating Thomas in the Noodle Bowl and then going to a Parts Generator. In Custom Robo Arena it can be purchased from Encephalon Isle's Parts Shop for $20.00. 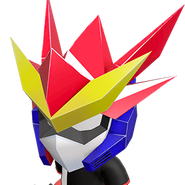 A Spirit of Ray Mk II is available in the base game. It is a Primary Grab Spirit under the Advanced class. Its Spirit Battle uses a Mii Gunner wearing the Ray Mk III costume and equipped with a Rocket Belt, with its moveset meant to emulate Ray Mk II's default weapons in Custom Robo V2; Grenade Launch being a stand-in for Straight Bomb S, Stealth Burst for Sniper Gun, Lunar Launch for Ground Legs, and Bomb Drop for Speed Pod P. The Mii Gunner will frequently use the Special Moves for the battle and have increased power on all ranged weapon attacks. The stage is the Hazardless form of Pokémon Stadium 2 (meant to resemble the series' Holosseums) and the song that plays is "Marionation Gear".

The Ray Mk II Spirit can also be acquired inside a Treasure Chest in The Light Realm during World of Light. It is also enhanceable; when it reaches Level 99, it will transform into Ray Mk III. It is a Primary Grab Spirit under the Ace class.