Monster Hunter
A Rathalos (リオレウス, Liolaeus) is a type of flying wyvern from the Monster Hunter series, created by Capcom. They are one of the most well-known monsters in the series, and can appear in many varied habitats.

The Rathalos Armor, which is made from Rathalos' materials in the Monster Hunter series, is a DLC costume for the Mii Swordfighter. 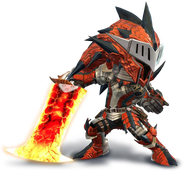 Rathalos appears as an Assist Trophy and a boss in Super Smash Bros. Ultimate’s Classic Mode and Adventure Mode: World of Light, where it serves Galeem in the latter. He is seen in the Ancestral Steppe from Monster Hunter 4 Ultimate

After he loses half his HP, the boss Rathalos will become faster. He can be stunned if hit by Pitfalls, Deku Nuts, or attacks that can cause stunning. Once his stamina is completely drained, the Rathalos collapses, just like in his dizzy animation.

Rathalos also appears as an assist trophy. When he is summoned, he will fly down from the sky. He uses the same attacks like he does during his bossfight. However, he does not fly into the background. He is immune to Explosive Barrels, Deku Nuts or Pitfalls. He can be KO'd but he is durable, has flinch resistance and cannot be grabbed. 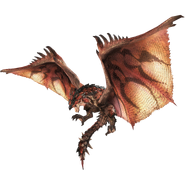