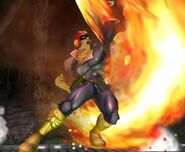 Raptor Boost used in Midair in Super Smash Bros. for Nintendo 3DS/Wii U