This article is about R.O.B.'s appearance in Super Smash Bros. for Nintendo 3DS and Wii U. For other uses, see R.O.B.

After completing either option, you must fight and defeat R.O.B. on PictoChat 2.

After completing either option, you must fight and defeat R.O.B. on Wrecking Crew.

R.O.B. received many buffs to increase his knockback, speed and range. However, some of his attacks were also nerfed as well.

NTSC: This NES accessory was released in 1986--a groundbreaking system that controlled the robot via a game on the screen. In Smash Bros., R.O.B. has two projectile weapons and can use his rocket base to fly through the air. If you let his Robo Beam charge over time, it'll make for a powerful blast.

PAL: Released in Europe in 1986, R.O.B, a peripheral for the NES, was a little robot that responded to flashing lights in games. In this game, he can fire gyros and lasers at his enemies. He also has the ability to hover, which is handy for recoveries. keep in mind that his Robo Beam can be charged up for an extra-powerful shot.

R.O.B.'s side smash, S3, fires a laser beam that does more damage up close. You can also aim it slightly up or down before firing. His down special Gyro sends a spinning top hurtling forward and can be charged for more damage. You can even dodge while charging!

Super Diffusion Beam (All Star, Wii U only)

NTSC: For R.O.B.'s Final Smash, he folds his arms down, transforms into an invincible cannon, and fires a huge beam that can be panned slowly up and down. The beam splits up partway through into smaller beams that drags foes to the center, where they'll be hit continuously. The assault finishes off with a single wide beam just for good measure.

PAL: Same as above, with only two differences (center > centre | panned > aimed) 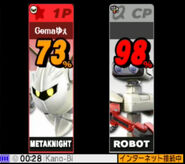 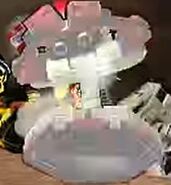 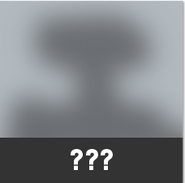 R.O.B. as he appears in the Official Website. Note that his image can't be seen well, since he is a secret character. 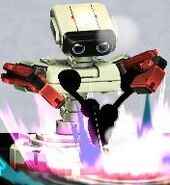 R.O.B. being Screen KO'd
Add a photo to this gallery

Retrieved from "https://supersmashbros.fandom.com/wiki/R.O.B._(Super_Smash_Bros._for_Nintendo_3DS_and_Wii_U)?oldid=494858"
Community content is available under CC-BY-SA unless otherwise noted.