Real world
Isle of the Ancients (The Subspace Emissary)
R.O.B. (ロボット, Robotto?), short for Robotic Operating Buddy, was an accessory for the Nintendo Entertainment System, intended to be disguised as a toy, rather than a video game, due to toy stores' avoidance of video games after the video game crash of 1983.

R.O.B. was originally advertised as a toy in order to sell to toy stores in order to alleviate retail fears following the video game crash of 1983. R.O.B. was compatible with two games, Gyromite and Stack-Up, and although the player didn't necessarily need R.O.B. to play the games, he still remained a key figure in Nintendo's attempt to keep the video games industry alive.

Although R.O.B.'s time has passed, his legacy lives on, as he was named the fifth in GameSpy's top twenty-five smartest moves in gaming history. On the downside, ScrewAttack called R.O.B. the fifth-worst game peripheral ever, citing that he only moved up and down and side to side, was noisy and slow, was nearly impossible to put together by oneself, and specifically noted the lack of games you could play with R.O.B.

R.O.B. appears as a playable character in Mario Kart DS. A treasure in the Pikmin 2 game was "Remembered Old Buddy", being R.O.B.'s head and having the initials R-O-B. In Kirby's Dreamland 3, there is a stage where Kirby must complete puzzles in various rooms to collect pieces of R.O.B. for Professor Hector, R.O.B.'s creator in Gyromite, so that R.O.B. can be rebuilt. Robotic-cranes designed in R.O.B.'s image can be seen in the F-Zero GX course "Port Town Aero Dive", which can also be seen in the Brawl stage of the same name. Also, R.O.B.'s legacy is also paid homage to in the Star Fox series where the Star Fox team's robotic helper, ROB 64, was named after R.O.B. 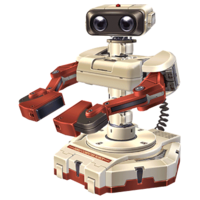 R.O.B. is an unlockable playable character in Super Smash Bros. Brawl. There are also many R.O.B. enemies in the Subspace Emissary and he also appears when the Ancient Minister's clothes are burned off. He sports his Japanese color scheme, being white and red like the Japanese Famicom, though one of his alternate palettes is his North American design, being gray and black like the NES. He appears as the simple robot, without any specific accessory from his game configurations except for the hands, that are in fact his Stack-Up hands. He also uses a "Gyro" and the "Spinner" from his Gyromite configuration during his Gyro attack. Overall, the R.O.B. in Brawl looks more realistic than the actual toy.

R.O.B.
R.O.B. sporting his Famicom colors. R.O.B. debuted in Japan as Robot in 1985 as an add-on for the Famicom. He could be combined with a "gyro set," etc. for two types of play. The player controlled Professor Hector, the TV emitted light, and R.O.B. responded to the light by moving. At the time, it was epoch-making game play. Recently, R.O.B. appeared in Mario Kart DS.

The R.O.B. Squad is the general term referring to the army and race of R.O.B. enemies in The Subspace Emissary. Although having no real canon of their own outside of the Smash Bros. series, the story of Subspace Emissary suggests that the race of R.O.B. robots called the floating island named the Isle of Ancients their home, and was subsequently taken over by Tabuu in preparation for his invasion into the Smash Bros. world.

R.O.B. returns as an unlockable playable in Super Smash Bros. for Nintendo 3DS and Wii U, being officially confirmed on the Super Smash Bros. official site on October 15th, 2014. His design has been updated to appear more glossy than metallic, closely resembling his real-life appearance. Additionally, his default color scheme differs depending on which version the game is played; being red and white on the Japanese version and red and grey on the USA/PAL regions. His Final Smash has been changed to Super Diffusion Beam, in which he fires a huge, single beam that traps the opponent before powerfully launching them.

R.O.B.
This NES accessory was released in 1985, a groundbreaking system that controlled the robot via a game on the screen. In Smash Bros., R.O.B. has two projectile weapons and can use his rocket base to fly through the air. If you let his Robo Beam charge over time, it'll make for a powerful blast.

R.O.B. (Alt.)
R.O.B.'s side smash, S3, fires a laser beam that does more damage up close. You can also aim it slightly up or down before firing. His down special Gyro sends a spinning top hurtling forward and can be charged for more damage. You can even dodge while charging! 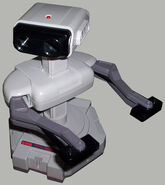 A timeline of R.O.B.'s American and Japan designs.