Quick Attack (でんこうせっか, Denkō Sekka?, lit. "Lightning Speed") is Pikachu's Up Special Move in the Super Smash Bros. series. After a short delay, Pikachu moves in a straight line in the direction in which the control stick is tilted, or upwards if it is not tilted. A Tilt of the control stick in a different direction will cause another, similar burst.

The high speed of this move renders Pikachu nearly invulnerable, but it is exposed at the beginning, middle, and end moments, when it briefly holds still. Quick Attack requires much practice before players can effectively take advantage of its two-direction functionality.

This attack deals no damage. However, it is by far one of the best recoveries overall. Pikachu is notable for having one of the most diverse recoveries as well. Pikachu has multiple invincibility frames during the beginning and middle. It is possible to attack Pikachu only before and after the bursts. Because of this, Pikachu can ledge-stall indefinitely. The range of this move also allows Pikachu to go far out from the edge to edgeguard. It is also possible to travel with almost no change in direction between bursts. Pikachu can alternate between taunts and Quick Attack, each canceling the other. Finally, it can be used to escape situations and can go through a portion of the wall in Break the Targets.

Pikachu's Quick Attack in Super Smash Bros. (Click to zoom)
Add a photo to this gallery 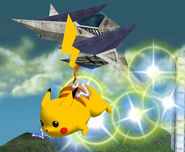 Quick Attack in Melee.
Add a photo to this gallery

Pikachu can deal light damage to characters it passes through, being stronger in damage (5%, if hit twice by Pikachu pulling a 180°), but it has less range than in Melee. Thus, people often use Skull Bash as an additional recovery move. It has more invincibility frames by the edge, however.

The first burst in Brawl.

The second burst in Brawl.
Add a photo to this gallery

In Super Smash Bros. for Nintendo 3DS and Wii U, Quick Attack can be customized into Meteor Quick Attack or Quick Feet.

Meteor Quick Attack doesn't bring Pikachu as high, but can meteor smash anyone it hits, especially at the start and when Pikachu changes direction.

Quick Feet will only transport Pikachu in a single direction, but will take him much farther.

Pikachu's quick attack can also be cancelled into the ground, in a maneuver known as Quick Attack Cancel (also called QAC'ing). This is a very useful technique, as it is seen as a main way for Pikachu to approach many characters. With practice, it can also lead into a well-placed aerial or special move. To perform a QAC, you must hold the control stick down right after you initiate the move. It requires precise timing, and can difficult to perform at first. If performed successfully, Pikachu will make the "bending" animation, but won't move at all.

Retrieved from "https://supersmashbros.fandom.com/wiki/Quick_Attack?oldid=475449"
Community content is available under CC-BY-SA unless otherwise noted.