Smashpedia
Register
Don't have an account?
Sign In
Advertisement
in: Characters, Stickers, The Legend of Zelda universe,
and 24 more

Official artwork of Princess Zelda from The Legend of Zelda: A Link Between Worlds

Zelda's first appearance was in the original Legend of Zelda game. She has appeared in almost every installment of the Zelda series (excluding Link's Awakening). Since then, she has usually filled the role as the princess of Hyrule, but unlike Nintendo's other prominent character Peach, Zelda takes a much more frequent and active role in battles against the evil Ganon, such as in The Wind Waker, and The Twilight Princess, where she attacks Ganondorf with Light Arrows and in Spirit Tracks, where she uses her Light Arrows against Malladus. Throughout these battles, she has been shown to have very powerful magic abilities.

Zelda's age can vary throughout the Zelda games. In some games, she is young girl, and in others, she takes the role of a young adult.

Zelda appeared as a playable character on two games for the CD-i, a little-known console that sold very few units. Because of its small market and due to the fact that Nintendo struck them from the Legend of Zelda canon, most people who know of the existence of these games disregard them and consider Zelda's appearance in Melee her first appearance as a playable character. 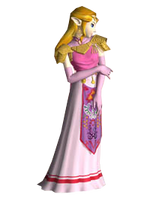 Zelda makes her first appearance in the Super Smash Bros. series as a starting playable character in Super Smash Bros. Melee. Zelda is a powerful character who relies on magic. She is also a bit unique due to her ability to turn into another character entirely, Sheik. Her B-special move is Nayru's Love, which causes a brief blue diamond shield to protect Zelda. Her side-special is Din's Fire, which sends a powerful fireball at her opponents. Her up-special is Farore's Wind, which will teleport Zelda up in the air. Lastly, her down-special is Transform, which allows her to transform into Sheik.

Zelda
The crown princess of Hyrule. She knows much about the Triforce; in fact, the only person who likely knows more about Triforce lore is Ganondorf himself, whom Zelda evaded in Ocarina of Time by transforming into her alter ego, Sheik.

Zelda [Smash]
Zelda is a bit slow and, because of her light frame, easy to send flying. On the other hand, her magical skills lend her reliable and explosive attack power. Zelda's easier to use if you focus on waiting and countering rather than pressing attacks. She can use Nayru's Love to reflect projectile attacks or as an offensive weapon.

Zelda [Smash]
Zelda's midair Lightning Kick centers immense magical power in the ball of her foot. If she strikes perfectly, the attack is as strong as can be. If her aim is slightly off, it'll be exceedingly weak. Farore's Wind again utilizes Zelda's magical prowess, this time by transporting her great distances. It's vital to know the lay of the land before using this move. 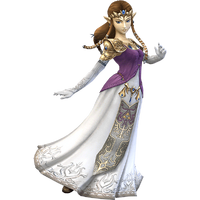 Zelda returns in Super Smash Bros. Brawl as a starter character, with her new design based on her appearance from The Legend of Zelda: Twilight Princess. She retains the ability to transform into Sheik from Melee, now appearing as "Zelda/Sheik" on the character selection screen, and unlike in Melee, her starting form can be chosen. As with all other characters, Zelda received a Final Smash in Light Arrow, a powerful beam of light with near one-hit KO levels of knockback.

Zelda has a trophy that is awarded each time the Classic mode is completed with Zelda on any difficulty. See Light Arrow for the trophy description of Zelda's Final Smash:

Zelda
The queen of Hyrule. In other games, her role changes between titles. In Ocarina of Time, she was hunted by the would-be conqueror, Ganondorf. She deceived him, however, by adopting the persona of Sheik. In Twilight Princess, she surrendered to Zant and was held as his prisoner.

Robed Zelda (With Hood)
The princess of Hyrule, loved and trusted by the people. When Hyrule is invaded by Zant from the Twilight Realm, Zelda is resolute in opposing him...but she chooses to protect her people and must surrender. From then on, she is imprisoned in the Twilight Hyrule Castle. In memory of the lost people of Hyrule, Zelda wears a black robe of mourning.

Zelda (Wind Waker)
The rightful successor of the throne and descendant of the true royal bloodline of Hyrule. She strove to put an end to the ongoing battles with Ganondorf. As the bearer of the Triforce of Wisdom, she became a target of the resurrected Ganondorf. Although she was hidden in Hyrule Castle, Ganondorf managed to find and kidnap her. 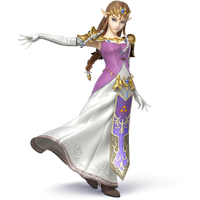 Zelda
This is the namesake of the Legend of Zelda games. Her appearance may change, but she always plays an important role. In Smash Bros., she's quick on the draw when it comes to magic, though a bit slow when moving. She has a new move that summons a Phantom to her aid.

Zelda (Alt.)
Zelda's forward air attack, Lightning Kick, is a valiant kick with a magically charged tip. Striking with just the glowing spot will deal heavy damage and launch your opponent. Din's Fire, her explosive side special, can be guided up and down and has a greater blast if the button is held.

Adult Zelda (Ocarina of Time)
In the seven years following Link's disappearance, Hyrule falls under the rule of the evil Ganondorf and Zelda grows into a young woman. To help Link in his quest to find the seven Sages, she takes on the guise of a young man named Sheik. The real identity of this mysterious helper is just one of the surprises awaiting Link.

Young Zelda (Ocarina of Time)
The Princess of Hyrule chosen by the goddesses. Zelda dreams of a darkness descending on Hyrule and tells Link where he must travel next. Fleeing Ganondorf, she gives Link the Ocarina of Time. It is seven long years before he is heard from again...

Zelda (Spirit Tracks)
This Princess Zelda lives a suitably peaceful royal existence in Hyrule Castle. "Existence," however, is relative, and her life gets turned upside down after something awful happens along the way to the Tower of Spirits with Link. What will this spirited young woman do as only a spirit?!

Zelda's Spirit (Spirit Tracks)
In The Legend of Zelda: Spirit Tracks, Chancellor Cole casts Zelda out of her body, so she agrees to join Link on his quest in her spirit form. On the plus side, Link (and you!) can still see and hear her as you explore temples together. She'll even possess a Phantom or two if it helps Link get the job done!

Zelda (Wind Waker)
Princess Zelda plays a variety of roles throughout the games bearing her name. In the Wind Waker, she's a pirate who travels the seas without knowing her true identity. Even when she learns she's a princess, she quickly returns to her piratey ways. In the end, she takes up a bow to fight beside Link.

Hooded Zelda
When a dark shadow invades Hyrule, Zelda sacrifices herself and is imprisoned in the world of Twilight. Her dark attire while a prisoner is appropriate to the title of the game, but Link's bravery convinces her to toss the robes and take up her bow and arrows instead.