Princess Peach (ピーチ姫, Pīchi-Hime?), also known as Princess Toadstool, or just Peach, is a character from the Super Mario universe, and is usually seen as Mario's damsel in distress. As her name suggests, she is the princess and ruler of the Mushroom Kingdom. In 1985, Peach was known as "Princess Toadstool" outside of Japan, and she has been known as "Princess Peach" since Yoshi's Safari & Super Mario 64.

Princess Peach has been a mainstream Mario character since her first appearance in Super Mario Bros., in which Mario had to rescue her from the clutches of the evil Koopa King Bowser. She usually takes on the role of the damsel in distress, although she has been known to help out Mario on some occasions. For example, in Super Princess Peach, it was her turn to save Mario, Luigi and Toad from Bowser. Another well known case was when she was the last member to join Mario's party in Super Mario RPG: Legend of the Seven Stars to help him retrieve the seven Star Pieces and defeat Smithy; she was also noted for being the only party member with a group healing skill as well as a revival spell, making her incredibly valuable as an ally. Her first playable appearance, however, was in Super Mario Bros. 2 where she had to help save the dream land called Subcon along with Mario, Luigi and Toad. She is also known to be Mario's love interest. 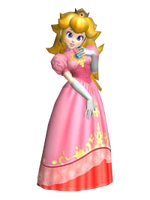 Peach appears as one of the fifteen default characters available in Melee. She is based on her early appearance from the Nintendo 64 era, notably Super Mario 64, but her dress has been given slightly more detail. Peach is considered by professional players to be amongst the best characters in the game and is fifth place in the current tier list. Peach is also quite famous for her floating and vegetable plucking powers, hailing from the game Super Mario Bros. 2.

As a playable character, Peach has three trophies, each available by defeating Classic Mode, Adventure and All-Star modes. Her three collectable trophies reads as follows:

Peach [Smash]
Peach's ability to float is invaluable in Super Smash Bros. Melee, as she can return from incredible distances. Balancing this talent, though, is the fact that she's quite light and can be sent flying with a single powerful attack. Her attacks are fairly weak, so you'll have to hang around to win.

Peach [Smash]
Peach's Smash A attack will set her swinging with either a frying pan, tennis racket, or golf club. These bludgeoning devices appear randomly and have different reaches and power levels. The princess uses Toad to absorb attacks, and he counters by sending spores out at attackers. Don't worry about the little guy, though; he takes his job seriously. 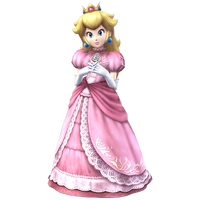 Peach returns as a veteran to Brawl. She is now based on her recent appearance with the two panniers since Super Mario Sunshine, but her dress is slightly more detailed, much like in Melee. Her moves have been virtually unchanged from Melee, with a few minor enhancements and/or nerfs. Her Final Smash attack, Peach Blossom, involves her lulling all grounded opponents to sleep and deals damage as well.

Additionally, Peach appears as multiple trophies in the game:

Peach
The princess of the Mushroom Kingdom. Her long blond hair is a perfect match for her pink dress. Regardless of the number of Toad retainers she has, she's often kidnapped by Bowser. Though she's usually the damsel in distress, she got a starring role in Super Princess Peach, where it was her turn to rescue Mario and Luigi.

Paper Peach
The princess of the Mushroom Kingdom. With her sparkling crown and gorgeous blond hair, Peach always looks the part, even when flat as paper. Count Bleck kidnaps the princess and tries to force her to marry Bowser. While jumping, Peach can use a special umbrella technique that allows her to float down gently or reach otherwise inaccessible places.

Wedding Peach
The princess of the Mushroom Kingdom adorned in a pure white wedding dress rather than her usual pink one. Peach also has her long blond hair drawn up in a ponytail. And who might she be marrying? Bowser of all people, who was also forced into the marriage by the scandalous Count Bleck. Brainwashed by Nastasia, Peach is even forced into giving her vows. 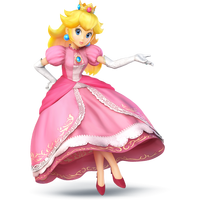 Peach was confirmed to be playable in Super Smash Bros. for Nintendo 3DS/Wii U on September 12, 2013, one day before the 28th anniversary of Super Mario Bros., and is the third female character to be announced after Samus and Wii Fit Trainer. Aesthetically, some of her attacks now have new visual effects, such as a ribbon swirling around her during her up smash. Like Mario, Luigi and Bowser, her design is based on her appearance from recent Mario games such as Super Mario 3D World and Mario Kart 8, although her dress has been made more stylized, much like in the last two Smash Bros. games.

Peach
Princess of the Mushroom Kingdom, Peach continues to prove that "powerful" and "cute" are not mutually exclusive. In Smash Bros., Peach uses her dress to float above the fray, suddenly descending and attacking with numerous weapons. A frying pan? Umbrella? TOAD?! Where does she keep it all?

Peach (Alt.)
Peach may be a princess, but that doesn't mean she shies away from an honest day's work. Her down special Vegetable is basically farm labor, and the fruits...er, vegetables of her work can be thrown. An angry-looking vegetable will do extra damage, too! She can also pull up Bob-ombs, or even a Mr. Saturn!

Baby Peach
Princess Peach is cute to begin with, and she only gets cuter as a baby. Unlike Princess Peach, Baby Peach is more fond of her pink binky than of conversation. Despite this lack of communication, she makes for a great partner in sporting events!

Peach + Birthday Girl
Princess Peach, where are you off to with that pink parasol? A day at the beach? More like a day at the races! Her tough and unconventional karts are ready, and she wants to take the checkered flag. Expect to see Peach win and be elegant at the same time.

Peach (Tennis Outfit)
Peach brings an elegance and grace to tennis that her opponents are hard- pressed to match. Her skills with a racket can put the ball right where she wants it. How she and Baby Peach can play against each other without destroying space-time is the real question.

Paper Peach
Usually the Sticker Fest, sponsored by Princess Peach, is held without a problem. However, one year Bowser shows up to steal the Royal Stickers and ends up peeling off with Princess Peach! With your help, Mario must set out to stick things back in their proper place!

Peach (Baseball)
The thought of yet another kidnapping is never far from Peach's mind, but in Mario Super Sluggers, she gets a nice break to just focus on the game. As the leader of the Peach Monarchs, she shows off her skills with her Star Swing, Heart Swing, drawing a heart in the air to distract the fielders.

Peach + Daytripper
You may think it doesn't look like a racer. You may think it would look more at home on a carousel. But Peach will have the last laugh as she sails past the finish line, leaving you in the dust. The Daytripper's great handling lets it breeze through even the trickiest of courses--and what it lacks in speed, it makes up for in acceleration. 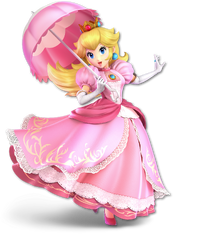 Peach is confirmed to be playable once again in Super Smash Bros. Ultimate, only this time she is an unlockable character. She is classified as fighter #13.

The English Wikipedia has an article on Princess Peach. Based on the article's quality, it can or can not be used to improve this article.