Pound is very useful when recovering, as it can be used between jumps to give Jigglypuff more horizontal distance. This technique is required to beat Bonus 2 in Super Smash Bros.

Although Pound is mostly used for recovery and movement purposes, it can also be utilized as an effective attack. Pound's hitbox lasts longer than one would expect, causing opponents to drop their guard too early at times. In certain situations, Pound can also serve as a setup for Jigglypuff's powerful Rest attack. Pound is also useful as an attack in Brawl due to its hitbox gaining the Shield damage effect, causing it to deal heavy damage to an opponent's shield should they be foolish enough to put it up.

Pound is also useful for interrupting projectiles, energy attacks, Donkey Kong's Giant Punch, and virtually any other move in the original Super Smash Bros; where it also serves as an excellent approach because it punishes shields and interrupts everything else. It also provides Jigglypuff with a highly reliable method of recovery.

In Super Smash Bros. for Nintendo 3DS and Wii U, the move can turn into Sideways Pound and Pound Blitz via Customizations. Sideways Pound is the same as Pound, however, at the end of the punch there's a small click of energy. While Pound Blitz has a Multi-Hit effect, and then doing a finishing Pound. 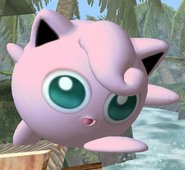 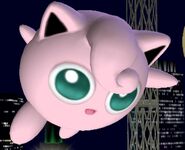 Pound being used in midair in Super Smash Bros. Melee.

Pound being used in midair in Super Smash Bros. Brawl.

Jigglypuff using Pound Blitz.
Add a photo to this gallery

Pound is based off a move of the same name in the Pokémon RPGs. In the Pokémon games, Pound is a basic physical Normal-type attack with no additional effects, similar to Tackle. Like Tackle, Pound is either naturally known or learned at a very low-level by many Pokémon.

Quickly pressing Up after performing the Pound gains Jigglypuff a slight amount of vertical distance. This technique is known as the Rising Pound. One can also do a "Falling Pound" by pressing Down instead of up. This "Falling Pound" is an effective means of returning to the ground, but should not be overused.

A showcase of Pounds ability to cancel projectiles.

Retrieved from "https://supersmashbros.fandom.com/wiki/Pound?oldid=471690"
Community content is available under CC-BY-SA unless otherwise noted.