A Poppant running at top speed.

A Poppant (ポッパラム, Popperam in Japan) is an enemy in Super Smash Bros. Brawl's Subspace Emissary mode. A Poppant's trousers are full of presents and candy. It is cowardly, and will run away from the player, scattering objects in its wake. Some of these objects will hurt the player if they hit him, making the Poppant difficult to chase down. It sometimes leaves food in its run, and when defeated, mostly healing items are left. It can also drop weak random items. Because of a Poppant's tendency to run off cliffs, capture can be harder unless you place yourself between a cliff and a Poppant.

A creature with a uniquely shaped lower body, where it carries boxes that look like gifts and candies. The boxes are even carefully tied with ribbons. It demonstrates its generosity by scattering its boxes as it wanders, but if it's seen, it will immediately flee at top speed. It redefines the word shy. No one knows why it spends its time scattering presents.

Poppant returns as a common enemy for Smash Run. This time, Poppant can throw Bob-ombs at players while running away, and it still retains the ability to drop items on the field.

These enemies first appeared as part of the Subspace Army in Super Smash Bros. Brawl. They're known for storing a lot of items and food. They're also painfully shy, fleeing the moment they see a fighter, dropping items as they go. Catch them quick for some serious rewards! 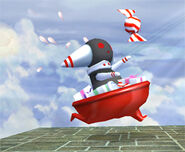 Add a photo to this gallery
Retrieved from "https://supersmashbros.fandom.com/wiki/Poppant?oldid=537079"
Community content is available under CC-BY-SA unless otherwise noted.