Official artwork of a Pokémon trainer.

A Pokémon Trainer is any human in the fictional world of Pokémon whose hobby, pastime, or profession is the collecting, caretaking, and competitive battling of any of the eponymous Pokémon creatures. The humans being the commanders of their custom-trained Pokémon in battles is as important as the abilities of the Pokémon themselves in all forms of Pokémon media.

From the very outset of the Pokémon franchise, the world of Pokémon had been established as an Earth-like world populated by humans and, notably, an infinitely diverse biomass of magical creatures called Pokémon (short for Pocket Monsters). In this world, many humans are referred to as Pokémon trainers if they collect and take care of Pokémon, and train them for use in competitive cock-fighting-style matches with the Pokémon of other trainers in Pokémon battles, officially sponsored and otherwise. Other Pokémon-related hobbies and professions exist in the world, such as Pokémon breeding, and a wholly different activity is undertaken by Pokémon coordinators who groom their Pokémon for use in Pokémon contests more closely resembling dog shows, but by far the path of the Pokémon trainer is the "primary" sporting activity in the franchise. This is the main activity/quest that the "main" Pokémon RPGs feature; as such, a player of a Pokémon RPG is considered a Pokémon trainer himself or herself.

Any Pokémon RPG casts the player as a young Pokémon trainer ready to set out on a Pokémon journey across that game's region of the Pokémon world, on a quest to capture many species of Pokémon and, from them, train a team of Pokémon proficient enough in the sport of Pokémon battling that they may carry the trainer to victory against that region's Pokémon League. The trainer's traditional tool for capturing Pokémon is the Poké Ball, which is sold at Poké Marts in the game's various cities and comes in many distinctive varieties, and a trainer by tradition receives a piece of high-tech equipment called the Pokédex, which functions as an encyclopedia for the Pokémon in that region which the trainer must fill up, among other adventuring gear.

Throughout each journey, the trainer will battle hundreds of other trainers as well as encounter countless Pokémon in the wild, and the trainer will be involved in subplots involving thwarting the schemes of criminal organizations of trainers whose name traditionally starts with "Team", such as the first and second generation's Team Rocket, the third generation's Team Magma and Team Aqua (among other Teams in GameCube Pokémon installments), and the fourth generation's Team Galactic. While the Pokémon Trainer was always depicted as a boy in each RPG, from Pokémon Crystal onwards the player could choose the gender of the trainer; from then on, each new set of Pokémon RPGs has introduced a new pair of standard Pokémon trainer designs, such as a pair each for Pokémon Ruby & Sapphire, Pokémon FireRed & LeafGreen (featuring a new redesign of the playable trainer from the original Red & Blue versions often called "Trainer Red"), and Pokémon Diamond & Pearl.

The anime adaption of the franchise, expectedly, features a slew of distinctive Pokémon Trainers treated as actual characters. The main starring trainer of the anime, Ash Ketchum ("Satoshi" in the Japanese version), is likely the most widely known of all Pokémon trainers even outside the franchise. For over ten running seasons of the anime, Ash Ketchum has gone on a Pokémon journey spanning several regions, and he has been accompanied or otherwise encountered by many other trainers. And since the series' start is a duo of incompetent adult trainers from a crime syndicate named Jessie and James (Musashi and Kojiro in the Japanese version) who serve as the villains in the anime.

The profession of the Poké Ball-throwing Pokémon trainer is easily as iconically significant to the overall Pokémon franchise as the Poké Ball itself, and is often the image that the Pokémon franchise in general conjures. Perhaps that is why Super Smash Bros. Brawl, in addition to featuring individual Pokémon such as Pikachu as playable fighters, has now been revealed to feature the generic Pokémon trainer as a playable entity all the same, but the trainer is not the one that does the fighting; he stays away a safe distance as he "directs" his Pokémon played by the player to do the battling, just like the trainer would in normal Pokémon battles.

The only property appearing in Melee that can be said to represent the Pokémon trainer is the trophy featuring Misty. 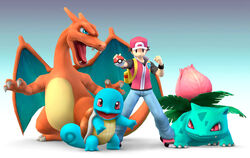 The Pokémon Trainer makes an official appearance as a playable entity in Super Smash Bros. Brawl, modeled after the male trainer design seen in Pokémon FireRed & LeafGreen. However, it would be inaccurate to call him a playable "fighter", as selecting him is like selecting a Zelda/Sheik-style character with three switchable forms, which are the three Pokémon the Pokémon Trainer has in his collection: Squirtle, Ivysaur, and Charizard. The trainer visually issues commands in the background of the stage to the Pokémon in the foreground, corresponding with the actions input by the player to the current Pokémon as the real fighter.

Pokémon Trainer will also be featured in Brawl in trophy form.

Retrieved from "https://supersmashbros.fandom.com/wiki/Pok%C3%A9mon_Trainer?oldid=109403"
Community content is available under CC-BY-SA unless otherwise noted.