Tomoe Hanba (Male)
Wakana Kingyo (Female)
A Pokémon Trainer (ポケモントレーナー, Pokemon Torēnā) is any human in the fictional world of Pokémon whose hobby, pastime, or profession is the collecting, caretaking, and competitive battling of any of the eponymous Pokémon creatures. The humans being the commanders of their custom-trained Pokémon in battles is as important as the abilities of the Pokémon themselves in all forms of Pokémon media.

From the very outset of the Pokémon franchise, the world of Pokémon had been established as an Earth-like world populated by humans and, notably, an infinitely diverse biomass of magical creatures called Pokémon (short for Pocket Monsters). In this world, humans are referred to as Pokémon Trainers if they collect, take care of, and train Pokémon for use in competitive matches with those of other trainers called Pokémon battles, officially sponsored and otherwise. Other Pokémon-related hobbies and professions exist in the world, such as Pokémon breeding, and a wholly different activity is undertaken by Pokémon coordinators who groom their Pokémon for use in Pokémon contests more closely resembling dog shows, but by far the path of the Pokémon Trainer is the "primary" sporting activity in the franchise. This is the main activity/quest that the "main" Pokémon RPGs feature; as such, players of Pokémon RPG are considered Pokémon Trainers themselves.

Any Pokémon RPG casts the player as a young Pokémon Trainer ready to set out on a Pokémon journey across that game's region of the Pokémon world, on a quest to capture many species of Pokémon and, from them, train a team of Pokémon proficient enough in the sport of Pokémon battling that they may carry the trainer to victory against that region's Pokémon League. The trainer's traditional tool for capturing Pokémon is the Poké Ball, which is sold at Poké Marts in the game's various cities and comes in many distinctive varieties, and a trainer by tradition receives a piece of high-tech equipment called the Pokédex, which functions as an encyclopedia for the Pokémon in that region which the trainer must fill up, among other adventuring gear.

Throughout each journey, the trainer will battle hundreds of other trainers as well as encounter countless Pokémon in the wild, and the trainer will be involved in subplots involving thwarting the schemes of criminal organizations of trainers whose name traditionally starts with "Team", such as the first and second generation's Team Rocket, the third generation's Team Magma and Team Aqua (among other Teams in GameCube Pokémon instalments), the fourth generation's Team Galactic, the fifth generation's Team Plasma, the sixth generation's Team Flare, the seventh generation's Team Skull and the eighth generation's Team Yell. While the Pokémon Trainers have been depicted as a boys in every instalment, from the Crystal version of Pokémon GS onwards, the player has had the option to choose the gender of the trainer; from then on, each new set of instalment has introduced a new pair of standard Pokémon Trainer designs, such as a pair each for Pokémon Advance, the GBA remake of the original (featuring a new redesign of the playable trainer from the original Red and Blue versions often called "Trainer Red"), and Pokémon (Diamond/Pearl). A small concession made by the franchise to the changing times is the gradual change from the "rivals to the death" image of the first series (Yellow, Red and Blue), to the now very casual friendly talk between the protagonist and their neighbor of Pearl/Diamond. In the Generation 3 games; Ruby, Sapphire, and Emerald, the rival took the gender opposite to the one chosen by the player.

The profession of the Poké Ball-throwing Pokémon Trainer is easily as iconically significant to the overall Pokémon franchise as the Poké Ball itself, and is often the image that the Pokémon franchise in general conjures. Perhaps that is why Super Smash Bros. Brawl, in addition to featuring individual Pokémon such as Pikachu as playable fighters, now features the generic Pokémon Trainers as a playable entity all the same. However, the trainer is not the one that does the fighting; he stays away a safe distance as he "directs" his Pokémon, played by the player, to do the battling, just like the trainer would in normal Pokémon battles.

In the original Super Smash Bros. for the Nintendo 64, a Pokémon Trainer (presumably the Kantonian male version) can be seen walking in the background during Pikachu's portion of the introductory video. 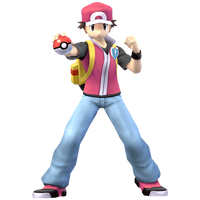 The Kantonian male Pokémon Trainer makes an official appearance as a playable entity in Super Smash Bros. Brawl, modelled after the male trainer design seen in the FireRed and LeafGreen versions. However, it would be inaccurate to call him a playable "fighter", as selecting him is like selecting a Zelda/Sheik-style character with three switchable forms, which are the three Pokémon the Pokémon Trainer has in his collection: Squirtle, Ivysaur, and Charizard. The trainer visually issues commands in the background of the stage to the Pokémon in the foreground, corresponding with the actions input by the player to the current Pokémon as the real fighter. One, however, might say the player controls the Trainer, who commands the Pokémon.

A person who raises Pokémon and trains them as partners in battle. In battle, a Trainer gives orders to the Pokémon and uses items. It's not an exaggeration to say battles can be won or lost on a Trainer's single strategic move. Trainers pour their hearts into their Pokémon and share anger, sadness, and joy as they adventure in hopes of becoming Pokémon Masters.

As Super Smash Bros. for Nintendo 3DS and Wii U no longer supports mid-match character changes, the Kantonian male Pokémon Trainer does not return as a playable character. While Charizard became a standalone playable character, Squirtle and Ivysaur were both cut from the roster as well. However, the Pokémon Trainer does make a cameo as a collectible trophy alongside both Squirtle and Ivysaur. The 3DS version also features Calem and Serena, the playable trainers from Pokémon X and Y, as a singular trophy under the name "Pokémon Trainer (Pokémon X & Y)".

Pokémon Trainer
Pop quiz! What do Misty, Brock, Cynthia, Iris, and Ash all have in common? That's right-- they're all Pokémon Trainers! This Pokémon Master in the making is the same. Back in Super Smash Bros. Brawl, he fought to be the very best-- like no one ever was. To smash them was his real test-- to launch them was his cause! 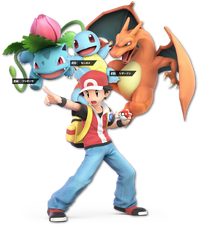 The Kantonian male iteration of Pokémon Trainer makes an official return in Super Smash Bros. Ultimate, now accompanied by his female counterpart as his “alternate costume”.

The English Wikipedia has an article on Pokémon Trainer. Based on the article's quality, it can or can not be used to improve this article.