Pocket (しまう／とり出す, Store Away/Take Out?) is Villager and Isabelle's Neutral Special Move. They can take in any item or projectile and keep it to use later.

Pocket is a like a cross between Mr. Game & Watch's Oil Panic and a standard Reflector. When Villager presses the Special Move button, he will reach out in front of him. Villager will then be able to grab any item or projectile directly close him or take any item he is holding and appear to put it in his pocket, as it quickly shrinks and disappears. This will not work if Villager already has an item in his pocket. This move has a special kind of vacuum hitbox that will literally "suck" the nearby item, meaning the Villager doesn't need to be directly in front of an item or projectile to grab it. Also, he cannot hold an item indefinitely; after 30 seconds the item will disappear from his pocket. This is not the same case in Ultimate, as it can be held indefinitely.

Pocket works on both solid and energy-type objects. Villager will then have the object stored in him until he decides to use it. Pressing the special move button again will release the object; if the object is a projectile, it will be automatically launched in the direction Villager is facing, and if it is a standstill item Villager will use it. If he is damaged enough, the item will be knocked out of his pocket. If he doesn't grab anything, a sound from the home game when you can't do an action will play. All projectiles the Villager throws back with his standard Neutral Special are 1.9 stronger than the original, however unlike most damage-multiplying reflectors, Pocket resets any damage multipliers when Pocketing, so players cannot continuously Pocket a projectile to build up higher damage output. Villager can Pocket continuously streaming projectiles, like Bowser's Fire Breath, but when he throws it back it will be just a single burst.

When Villager uses Pocket, it gives some invincibility frames (notable uses seen here), which can be useful when the player is trying to recover. The move is also known for negating Link's Final Smash if timed correctly, but the Villager cannot store it for later use. These invincibility frames also make this move is notable as Villager doesn't need to be facing the item directly, being able even to Pocket items from behind if timed right, as the invincibility frames will allow him to phase through projectiles and proceed to grab them.

Also, the Villager can literally "steal" some items from characters so they cannot use them again until the Villager is KO'ed, which can decrease those character's performance in battle. These include Diddy Kong's Banana Peel, Wario's Bike, R.O.B.'s Gyro, Bowser Jr.'s Mechakoopa, Wii Fit Trainer's Soccer Ball and Pac-Man's Bonus Fruit. However, like all other items the Villager can store, those will disappear after 30 seconds if the Villager does not throw them back; although the Villager can prevent this by pulling the item out and putting back in. This does not happen in Ultimate, and the other characters can still deploy their specials' items while Villager holds one of them. 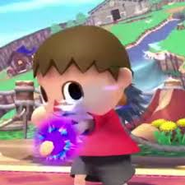 Villager throws back the pocketed projectile.

All items, with the exception of Assist Trophies, Poké Balls, Master Balls, and Smash Ball can be pocketed, whether they are lying on the stage or being used as a projectile. Shooting items' projectiles also count in it.

In Ultimate, an icon is displayed near Villager's or Isabelle's damage when they have pocketed an item:

The following is a list of character moves that Villager and Isabelle can pocket.

Garden is Villager's Neutral Special Move that can be used via customization. Villager can only pocket items in front of them, but can also put damaging flowers on opponents' heads.

Garden does deal damage, as the flower planted on opponents is very useful for racking up damage on them before hitting them with an attack. However, its range is severely decreased and the window is shortened, making it much more difficult for Villager to pocket objects. Villager should not try to pocket something coming from long-range; though he has more time to react, the window for pocketing is very small and he will often not be able to pocket it.

Pocket Plus is Villager's other customizable Neutral Special Move. Villager can now pocket items at a wider range, but their effectiveness is decreased.

Pocket Plus has an increased range for pocketing items and projectiles that can prove to be quite useful. Though the projectiles don't deal quite as much damage, this difference isn't noticeable when it is taken into account that the increased pocketing range is better for Villager's defensive game, keeping him safer from incoming items and projectiles. The ending lag isn't much longer than the regular Pocket, so Pocket Plus' strengths possibly outweigh its weaknesses.