Plasma Whip is Zero Suit Samus' Side Special Move. It shoots the Plasma Whip forward a long distance, with small knockback and damage throughout its length, except for a fairly large sweetspot at the tip.

The body of the whip can knock the enemy into the tip, which has large knockback (at least as large as Samus' Forward Smash, but with longer range) and is considered her best kill move outside of her Up and Back Aerial Attacks. The move is a little laggy after extending, but comes out at about the speed of a Smash Attack.

In the air, it can be used as a Tether Recovery; it differs from her other tether move, the Plasma Wire, in that it has longer horizontal range, but much less vertical range, giving Zero Suit Samus several options for Tether recovering, depending on whether she is level with or below the ledge. The Plasma Wire can also grapple ledges that are below Zero Suit Samus's level, which can be useful for varying up her recovery. 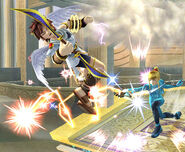 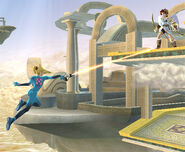 Plasma Dash is a dashing strike with your gun. Doesn't use the whip, so it can't grab on to edges.

The Plasma Dash is a form of horizontal recovery that covers a good amount of distance, though it cannot tether to ledges. It deals good damage and is a combo finisher as well. It takes a moment to get started but once it does it moves quite fast.

Whip Lash knocks foes toward you with the very end of the whip. The rest of the whip does nothing.

The Whip Lash only deals damage and knockback at the end of the whip, which makes it difficult to hit opponents with, requiring good spacing to actually hit them. If it does hit them though it knocks them towards Zero Suit Samus making it an excellent combo starter and kill set-up, comboing into up smash and up special for kill moves at high percentages and aerial attacks for combos at low-mid percentages. It can tether ledges and stops all forward momentum when used in the air which can be useful for mindgames.

Through hacking, unique item grabbing and throwing animations have been found for Plasma Whip. This suggests that the move was, at one point, also designed to have the ability to grab items from afar and fling them towards opponents. Judging from the animations, it might also suggest that Zero Suit Samus could steal opponents' held items by using Plasma Whip against them.