The Plant Barrier (プラントバリア, Puranto Baria) is Mega Man's Down Special Move that can be used via customizations in Super Smash Bros. for Nintendo 3DS and Wii U.

Four large flower petals circle around Mega Man for two seconds, protecting him from projectile attacks. Its attack (5% damage when thrown) and defense are higher than the Leaf Shield, but its throw distance is shorter.

Mega Man receives this weapon by defeating the boss Plant Man in Mega Man 6. The weapon was rather infamous for its energy consumption, preventing its heavy use. However, it was balanced by the fact it was one of Mega Man's more powerful barrier weapons and effective against a large number of enemies.

The Plant Barrier deals 1% more damage than Leaf Shield does. Its defense is superior, however; it will block larger projectiles like a fully charged Sun Salutation. Blocking them effectively requires good timing, because it takes a moment for the barrier to activate and the barrier vanishes the fastest of all the variations. Due to this short period of activation, the Plant Barrier has very short range, which is why it won't deal much more damage; it vanishes before the fourth petal can hit the enemy. Also, like the other variations, Mega Man can't use his up special while the barrier is active. However, the Plant Barrier lasts for so little time that a player might be able to recover in time if they use it off stage. 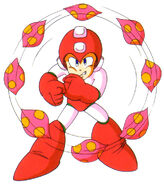 Plant Man.
Add a photo to this gallery
Retrieved from "https://supersmashbros.fandom.com/wiki/Plant_Barrier?oldid=509465"
Community content is available under CC-BY-SA unless otherwise noted.