Pit (Super Smash Bros. for Nintendo 3DS and Wii U)

This article is about Pit's appearance in Super Smash Bros. for Nintendo 3DS and Wii U. For other uses, see Pit.

Minami Takayama
Pit (ピット Pitto) is a veteran fighter and starter character from the Kid Icarus series in Super Smash Bros. for Nintendo 3DS and Wii U. His return to the series was confirmed on June 11th, 2013 during the E3 2013 Nintendo Direct.

Pit currently ranks 32nd on the tier list, shared with Dark Pit. He is, in short, a very balanced character with decent attributes all around - highlights include a good grab game, decent kill moves and a decent recovery. However, this 'decency' holds him back, as he has no standout feature making him a real effective fighter.

Pit is an All-Rounder, being good both on defense and offense, and capable of adapting to many situations. He has a good grab game, which complements his moveset oriented towards quick damage racking. His projectile allows him to put pressure on opponents, while his Side and Down Special allow him to maintain a good control of the stage.

Pit's greatest asset is the damage potential of his moves. On the ground he has excellent spacing tools thanks to the range of his Tilts, as well as a few combo starters. Pit's Rapid Jab is a good combo finisher, though the infinite version can follow up into Dash Attack, Up smash, or Forward Aerial. His Forward Tilt is a great spacing tool, his Down Tilt is a quick sweep that is good for combos, and his Up Tilt is great for getting opponents into the air for juggling.

Pit's Smash Attacks are all fast and with good range. Forward Smash is his strongest Smash Attack and a great combo finisher. Down Smash is excellent for edge-guarding and punishing rolls. Up Smash is a great anti-air move and juggle starter, however it can be hard to hit opponents next to Pit.

In the air Pit has moves that cover a wide area but can be difficult to string combos together at higher percentages, however, they have long-lasting hitboxes with multi-hit properties which can sometimes punish air dodges. Neutral Aerial is one of his best aerials, having high number of active frames, good damage, being a great combo tool and edge-guarding move that kills just off the edge at 130% on most characters. Forward Aerial is a good edge-guarding tool and combo move following his Titls, having great range and hitbox sizes. Back Aerial is a great combo finisher and KO move, boasting from being his strongest aerial in terms of knockback. Up Aerial is great for juggling, having low landing lag, which can allow short hop cancels into his other moves, such as Up Tilt. Finally, his Down Aerial is a fast sweep attack, and although it is unreliable as a Meteor Smash, it is useful to intercept anti-aerials.

Pit's combo moveset is vastly complemented by his grab game. Forward Throw combos into Dash Attack at lower percentages, as well as killing on the edge at higher percentages. Back Throw is great for getting opponents off-stage and can kill near the edge. His Up Throw can combo into Up Aerial, Neutral Aerial, and guided arrow. His Down Throw combos into many of his aerials depending on the opponents' percentage, mostly into Forward Aerial.

Pit's Neutral Special, Palutena's Arrow, is fast, deals some good damage, and is a good combo tool because of its guiding ability. Its speed can make it hard to guide the arrow, so it will definitely take some practice to master the timing and get the accuracy down. The projectile is a good zoning tool and doubles in damage when charged up; if an opponent is recovering low, guide the arrow downwards to hit them; if Pit is spaced from the edge just right when edge-guarding, guiding the arrow down as soon as it is fired will result in the arrow passing just over the edge to hit any opponents trying to snag it. If an opponent tries to jump over the projectiles, guide them upwards to hit the opponent. The arrow can be aimed upwards as well, which can be good for surprising opponents trying to approach from the air. Pit can also reverse the direction he aims the attack in, so he can surprise opponents coming from behind as well.

His Side Special, Upperdash Arm has Super Armor and can also reflect projectiles. It is one of Pit's best kill moves, but unfortunately it does not reliably combo into or out of much because of its starting and ending lag; because of this ending lag, the move should not be spammed or the opponent will be able to dodge and punish it. The move's Super Armor can make it a good horizontal recovery because edge-guard attempts will be left useless and the edge-guarding opponent will also take damage from the attack. Upperdash Arm can also break shields if it connects twice consecutively, though it is best to weaken the shield with other attacks before using this move to break them or the ending lag will get Pit punished.

Pit's Down Special, Guardian Orbitars, are the standard reflecting move; it won't deal damage but will push opponents away a short distance. This move will also block attacks, but it can break if receives enough damage, preventing Pit from using them again for some seconds.

Finally, his Up Special, Power of Flight, is a phenomenal recovery, which can be angled, allowing Pit to recover from nearly anywhere, and also allows him to go deeper for off-stage kills.

However, Pit has some few flaws that hurt his, but not hinder, his potential. His biggest problem is the lack of KO moves, relying mostly on edge-guarding. All his Special Attacks can be easily exploited, mostly his recovery, which lacks damaging hitboxes. With this in mind, Pit players must focus on a more defensive type of game, punishing mistakes with a flurry of combos and frustrating edgeguarding.

Pit received many buffs and nerfs, but was overall nerfed as a character. His Special Moves in particular has been changed, with all but his Neutral Special Move being replaced. Upperdash Arm has KO potential and possesses Super Armor while retaining its use as a reflector. Power of Flight is more difficult to gimp than Wings of Icarus, and can be used even if he is hit. Guardian Orbiters allow Pit to reflect projectiles from both sides. Pit's previously poor grab game was significantly improved.

However, Pit has also received some glaring nerfs. Palutena's Arrow, which was Pit's most versatilte tool in Brawl, is now significantly slower and has less range. His new Special Moves also creates new weaknesses: Upperdash Arm causes Pit to reel if used in the air, Power of Flight cannot be freely controlled, limiting some of its recovering potential, and Guardian Orbiters cannot be used indefinitely. Pit's attacks now have shorter hitbox duration, more lag, and deal less damage.His recovery was nerfed severely due to the aforementioned Power of Flight weakness, lower jumps, and the loss of gliding.

Aesthetically, Pit's design was updated to match his appearance in Kid Icarus: Uprising, with new animations for his dash, sidestep, and roll. Pit is voiced by Antony Del Rio, who voiced him in Uprising.

Pit is the captain of Palutena's royal guard. Despite the wings on his back, Pit needs the power of flight from Palutena in order to truly fly. In Smash Bros., he can still get more air than most, with four jumps and a special move that boosts him higher. He has a new reflect move--It protects both sides!

Pit's side special Upperdash Arm delivers an uppercut so strong, it can send foes flying for a KO. If you miss and fall off the stage, Pit's up special can bring him soaring back. Another of Pit's specials is Palutena Bow, which fires arrows Pit can aim even after they've left the bow.

Let's squash a misconception right now--there is nothing worse than being turned into an eggplant. Just lettuce tell you, being hit by an eggplant bomb is humiliating. It leafs you without mushroom to maneuver and also makes you the laughing stalk of your friends.

All of Pit’s Palutena's Guidance portraits.

Sonic hitting Pit with the Ore Club while fighting in Palutena's Temple. 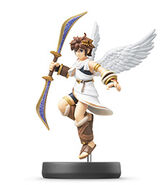 Pit using the Power of Flight.

Pit along with Kirby and Lucas.

Pit alongside with Cloud.

Pit along with Palutena.

Pit using the Three Sacred Treasures as his Final Smash.

Pit after he used the Super Leaf.