For fighter info, see Pit (SSBB), Pit (SSBWU/3DS), and Pit (SSBU).
For the character who is a clone of Pit, see Dark Pit.

Pit is an angel from Angel Land. His wings are only strong enough to fly for short distances, unless he has the Wings of Icarus. Taking up his sacred bow to stop the dark goddess, Medusa, he set out to gather the Three Sacred Treasures - the Arrow of Light, the Mirror Shield, and the Wings of Pegasus - when Medusa attacked his home of Skyworld and imprisoned Palutena, the benevolent goddess of Angel Land. Fighting his way through the Underworld, Overworld, and Skyworld, Pit was able to gather the three treasures and defeat Medusa, ending her threat.

Pit appeared again in Kid Icarus: Of Myths and Monsters for the Game Boy, which served as the only sequel in his series for nearly 20 years. In this game, Pit was sent to train and gather the Three Sacred Treasures again so that he could defeat a monster called Orcos. This game tends to go largely unnoticed, partially due to the fact that it was not released in Japan. However, aspects of Pit's design that were introduced in this game, such as his redesigned blue eyes, brown hair, and crown of laurel, as well as the design of the series' logo, made reappearances years later in Super Smash Bros. Brawl.

Following a surge of fan interest in the series due to Pit's appearance as a playable character in Brawl, Pit appeared again in Kid Icarus: Uprising which was developed by Sakurai himself and was released in late March 2012. His design in this game is taken directly from his redesign as featured in Brawl. In this game, Pit is once again tasked with defeating Medusa, who has been revived, and her army of monsters from the Underworld.

Many sources claim that during the production of Super Smash Bros., Pit was planned to be a playable character, before eventually being dropped after problems programming his wings arose. This is most likely false, as no sources exist to properly verify this rumor.

Pit appears as a collectible trophy within Super Smash Bros. Melee. The only way to collect it is to snag it on the Snag the Trophies Bonus Stage. The trophy features Pit's older design from games predating Brawl, although it features body proportions that are closer to his modern design.

Pit
The head of Palutena's personal bodyguards, Pit travelled near and far to gather Three Sacred Treasures that would help him defeat the evil goddess of darkness, Medusa, and free Palutena, the goddess of light. Pit couldn't fly with his little wings; only the Wings of Icarus let him take flight. Will Pit ever fight again? 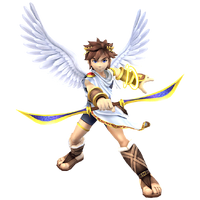 Pit appears as a new playable character in Super Smash Bros. Brawl. He has been heavily redesigned from his original appearance and Melee Trophy, taking on more realistic proportions and is overall much more elegant. He is seen using all three of the Sacred Treasures from Kid Icarus as his Neutral, Up, and Down Special Moves, albeit with changes from the original game. He is also seen splitting the Sacred Bow of Palutena into two sharp blades for his standard attacks, something that was not done in any previous game in the series. His Final Smash is Palutena's Army, where he calls on Palutena to send her army of angel centurions against the other characters.

The design created for Pit in this game is also used in the third game in the Kid Icarus series, Kid Icarus: Uprising, which largely owes its existence to Pit's appearance in Brawl.

Pit
The captain of the royal bodyguards of Palutena, goddess of light and ruler of Angel Land. The dark goddess, Medusa, conquered the underworld, the surface world, and the heavens, and imprisoned Palutena. Pit escaped and, armed with Palutena's magical bow, set out to free her. Along the way, he gathered Three Sacred Treasures with which he challenged Medusa. 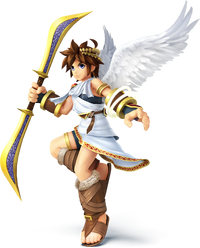 Pit returns as a playable character in Super Smash Bros. for Nintendo 3DS and Wii U, being the first Brawl newcomer to be confirmed. His design has been updated to match his appearance from Kid Icarus: Uprising, which itself a slight refinement of his Brawl redesign. While part of his moveset is the same as in Super Smash Bros. Brawl, such as Palutena's Arrow (now named Palutena Bow, as the weapon is known in Kid Icarus: Uprising), all of his other special moves as well as his Final Smash have been replaced, mostly to reflect his appearance in Kid Icarus: Uprising.

His Side Special Move has been changed to the Upperdash Arm, in which Pit dashes forward to uppercut opponents into the air, and his Down Special Move is the Guardian Orbitars, where Pit summons shields that reflect projectiles on both sides. His Up Special Move is the Power of Flight, where Pit flies high into the air, which can be angled left or right. His Final Smash has been changed to the Three Sacred Treasures, in which he dons The Arrow of Light, the Wings of Pegasus and the Mirror Shield from Kid Icarus: Uprising and fires arrows all over the battlefield.

Finally, Pit now has a Smash Taunt that can only be used on Palutena's Temple stage in the Wii U version. Once triggered, Pit, Palutena, and Viridi (And at one point, Chrom)appear and talk about one of the opponents on the field, similar to Snake's Smash Taunt in Brawl.

Pit
Pit is the captain of Palutena's royal guard. Despite the wings on his back, Pit needs the Power of Flight from Palutena in order to truly fly. In Smash Bros., he can still get more air than most, with four jumps and a special move that boosts him higher. He has a new reflect move—it protects both sides!

Pit (Alt.)
Pit is the captain of Palutena's royal guard. Despite the wings on his back, Pit needs the Power of Flight from Palutena in order to truly fly. In Smash Bros., he can still get more air than most, with four jumps and a special move that boosts him higher. He has a new reflect move—it protects both sides!

Pit (Eggplant)
Let's squash a misconception right now— there is nothing worse than being turned into an eggplant. Just lettuce tell you, being hit by an eggplant bomb is humiliating. It leafs you without mushroom to maneuver and also makes you the laughing stalk of your friends.