Piranha Plants are a carnivorous plant in the Mario universe which rise from Warp Pipes. It has appeared in every Super Smash Bros. game (except Super Smash Bros. Melee) as a stage hazard or enemy. In Super Smash Bros. Ultimate, it was revealed to be an upcoming playable character as DLC after the game's release as it is still in development.

Piranha Plants periodically appear from the Warp Pipes on the Mushroom Kingdom stage. They are enemies and seem to appear at random rather than according to any set rhythm. Just as in the original Super Mario Bros. game, Piranha Plants will not appear when a player is standing on top of the warp pipe or directly next to one. Sometimes, hitting the Piranha Plant will "neutralize" it and allow a player to come into contact with it without being damaged. A powerful enough hit will destroy the plant, although not permanently as another will simply take its place.

A Piranha Plant may sometimes appear as a stage element on PictoChat. However, they don't go up or down, and they stay on the stationary platform. Also, Petey Piranha, the first boss of the Subspace Emissary, is a Piranha Plant. [1]

A vicious, plantlike monster that typically hides in pipes. Piranha Plants emerge with mouths open, awaiting victims. A poorly timed jump means a chomping--hence the "piranha" name. While there have been exceptions--there are many Piranha Plants with unique traits-- they generally don't appear if Mario waits on top of or just next to a pipe. They hate fireballs.

These guys aren't so much carnivorous as Mario...nivorous. Ahem. There are lots of varieties, like Frost, Wild Ptooie, Ghost, Prickly, Dino, Bone, Elasto-Piranhas, Stalking, Naval... A helpful mnemonic is "Fireballs with Ground Pounds defeat baddies, even super nasties." 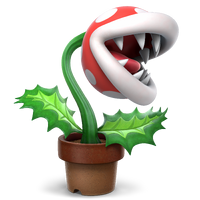 Piranha Plant was announced to be a downloadable character in Super Smash Bros. Ultimate during the final Smash Direct on November 1st, 2018. People who purchased the game before January 30th, 2019 received a code for redeeming Piranha Plant that could be used until the 29th of June 2019. Afterwards people who used the code got Piranha Plant early in February 2019 and Piranha Plant was later released as paid DLC in the same month.
Retrieved from "https://supersmashbros.fandom.com/wiki/Piranha_Plant?oldid=585533"
Community content is available under CC-BY-SA unless otherwise noted.