Combatants fight atop the wings of a biplane as it flies through the sky over a flat, 2D island. Over the process of the battle, combatants move from the biplane onto a yellow plane as flies towards and over Wuhu Island. There it flies through the yellow circles to gain points. Characters can be damaged by the background parts, such as the boat if they are knocked into it. 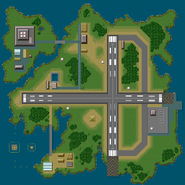 The island from lesson 3 as it originally appeared in Pilotwings. 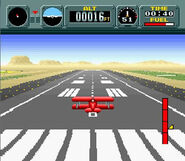 The biplane as it originally appeared in Pilotwings.

A plane flying towards Wuhu Island in Pilotwings Resort.

The Omega form of Pilotwings.

The Map of Pilotwings

Back in the day when planes had fairly weak engines, two pairs of wings were used to increase the plane's lift. These planes weren't meant for crazy acrobatic tricks, though--they were best suited for learning the basics of flying. Ride these, and leave the complicated stuff for another day!

To get to fly a plane around a tropical resort, normally you'd need to study really hard, take a flying test, fail the test, retake the test, get your license, save up for ages, and then go to a tropical island. In Pilotwings Resort, you get to skip those boring parts and experience speeding, turning, and rolling high in the air right away! Woo!

Wuhu Island from a different angle